Construction on Soo Locks to Begin

Toward the end of March, the U.S. Army Corps of Engineers held an open house in Detroit to update its current and upcoming projects, including the Soo Lock project’s construction status.

First opened in 1855, the Soo Locks comprise of four total, but only two larger locks are in use by passing ships; the proposed project would replace the two unused tresses with one larger lock in order to accommodate larger vessels.

According to the Detroit Free Press, 80 million tons of cargo pass through the locks annually on 8,000 freighters; a bipartisan group of legislators has coalesced around the cause of improving the aging structure in order to keep goods moving on the Great Lakes.

A 2015 study published by the Department of Homeland Security found that a shutdown of Poe lock, the largest of the four locks at Soo, would limit the shipping of iron and essentially halt all steel production in the Great Lakes region. That, DHS said, would lead to a complete stoppage in production of appliances, automobiles, construction equipment, farm equipment, mining equipment and railcars within weeks. 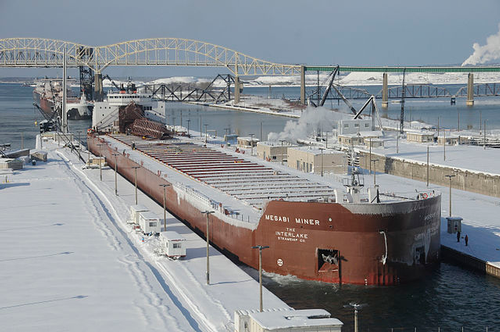 C. Paris, US Army Corps of Engineers
The largest of the Soo Locks, the Poe, carries most of the iron used in steel production in the Great Lakes region.

Last fall, the Army Corps allocated $32 million for some design and pre-construction work, which included deepening the upstream channel. If things move forward according to plan, channel deepening could be completed ($4.95 million), construction of the upstream approach walls could be started ($62 million) and design of the lock chamber could be continued ($8.355 million).

As of June 2018, the USACE estimated the total cost of the locks project at $875 million. As envisioned by the Corps, the project would involve replacing the two smaller locks with one new lock the same size as the Poe, 100 feet wide by 1,200 feet long. In the summer of 2017, the state of Michigan promised $50 million toward upgrading the locks.

To progress work on the Soo Locks, last month the USACE proposed spending more than $75.3 million on the locks next year. The funding request was submitted to President Donald J. Trump's request for the budget year and has since been included in the fiscal year 2020 president’s budget request to Congress.

After more than 30 years of planning and various campaigning for funding, the Soo Locks project is almost ready to commence construction.

The locks, having been previously closed on Jan. 15 for critical repairs and maintenance during the 10-week-long winter shutdown, reopened on March 25, marking the beginning of the 2019 Great Lakes shipping season. However, the MacArthur Lock, located on the south side of Poe, will continue to undergo maintenance until mid-April.

Slated to begin this summer, work to prepare the world-famous shipping channels for renovations is estimated to bring in over 1,000 quality jobs over the next decade. According to The Sault News, USACE Project Manager Maureen Mahoney stated, “The funding that we’ve received in the 2019 fiscal year will allow us to compete for the design and partial construction upstream of the locks.”

Primary construction is expected to begin in the spring of 2020 and will serve as the Corps' largest project in the Great Lakes region.

“We estimate at the peak of construction there will be 250 workers on site," Mahoney added.

Through the combined commitments made by the state and USACE, taxpayers will save an estimated $30 million, and the project's completion will likely be accelerated by one year. In addition, the new Soo “Super Lock” will also allow the maintenance on the other two locks any time of the year, instead of prolonging the repairs until the next winter shutdown.