The Sri Lankan government has recently approved the installation of a 100-megawatt floating solar power plant in the Maduru Oya Reservoir.

The photovoltaic farm is likely to be coupled with battery storage capacity and is implemented by joint venture Sri Lanka Mahewali Authority, state-run Ceylon Electricity Board, the Sri Lanka Sustainable Energy Authority and the Canadian Solar Institute. 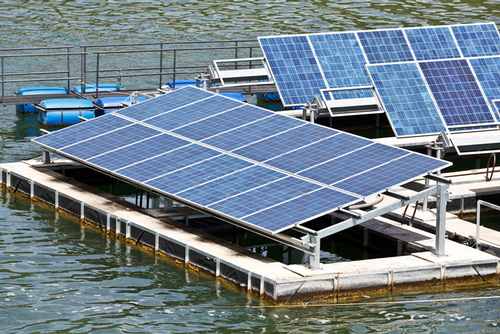 iSIRIPONG / Getty Images
The Sri Lankan government has recently approved the construction of a 100-megawatt floating solar power plant to be installed in the Maduru Oya Reservoir.

The approval of the 100 MW PV farm follows the Cabinet of Ministers approval for the development of 28 small-scale solar power projects from 28 investors in the island nation to produce clean power for the CEB for tariffs ranging between 12.84 Sri Lankan rupees (LKR) to 15.93 LKR ($0.073-$0.091) per kilowatt hour.

The Proposal and Previous Funding

The idea was initially proposed by the Canadian government and put forward by Sri Lanka’s president Maithripala Sirisena—who is also the Minister of Mahaweli Development and Environment—along with the Minister of Science, Technology and Research Susil Premajayantha, and Minister of Power, Energy and Business Development Ravi Karunanayake in March 2017.

The program entails the construction of a floating solar plant alongside an international tender to cover around 4 percent of the Maduru Oya Reservior, an equivalent of 202 hectares (2.02 million square meters). However, this was just the first step of a previously approved wider plan to incorporate more photovoltaic farms on various Mahaweli Authority-governed dams and reservoirs.

To aid these green innovations, in June 2018, investment company Japanese Sri Lanka Friendship Corporation announced the manufacturing of solar panels at Katunayake in Sri Lanka. In September, the Ministry of Finance and Mass Media in Sri Lanka announced its agreement with the Asian Development Bank for a $50 million loan to help develop rooftop solar projects.

In October, it was also reported that CEB would receive 2.5 billion Indian rupees ($36.5 million) from the French Agency for Development to implement Tranche II of the green power development and energy efficiency improvement and investment program.

The Sri Lankan government is currently accepting competitive international proposals to build the 100 MW floating PV farm. The construction is just one part of the Soorya Bala Sangramaya Phase IV program, under which the country aims to add 400 MW of solar.

Along with the Maduru Oya Reservoir plant, two additional 100 MW plants are planned for Pooneryn and one 100 MW plant in Monaragala.

At the beginning of January, it was reported that using floating solar photovoltaics on more than 24,000 manmade reservoirs in the U.S. could contribute 10 percent of annual national electricity production.

And just last month, Google announced its plans to move forward with a 10 MW solar array to be situated on top of fishing ponds in Taiwan.