The Council on Tall Buildings and Urban Habitat has confirmed that Mjøstårnet by Voll Arkitekter in Brumunddal, Norway, is the world’s tallest timber building upon its completion this month.

The 85.4-meter-high (280-foot-tall) tower was built using cross-laminated timber, which is billed as a sustainable wood material for tall building projects. The building has succeeded the 53-meter-high (roughly 174-foot-tall) Brock Commons Tallwood House in Vancouver (which is a hybrid wood and concrete structure) and the 49-meter-tall (roughly 161 feet) Treet building in Bergen, Norway (which is another all-timber building).

Construction for the Mjøstårnet, an 18-story timber high-rise, began in September 2018. The plans revealed that the structure would encompass 11,300 square meters (roughly 121,632 square feet) of space and contain various apartments, the Wood Hotel, offices, a restaurant and a 4,700-square-meter (roughly 50,590-square-foot) swimming hall.

The Council on Tall Buildings and Urban Habitat (CTBUH) has verified the status of Mjøstårnet, a mixed-use building in Brumunddal, Norway as the world’s tallest timber building! Take a look https://t.co/v08ttjzuRA pic.twitter.com/fEt0rKYXmh

The building was constructed four stories at a time within five stages, starting with a 16-meter (52-foot) base width. The structure incorporated glulam beams (glued laminated timber) and anchored the building with piles up to 50 meters deep (164 feet).

Moelven Limitre, timber specialist, installed the building’s timber structure, including the glulam columns and elevator shafts made entirely from CLT. These types of materials are strong enough to support large loads and by using the timber, all carbon absorbed from the atmosphere was locked into the structure permanently.

By using internal scaffolding and a large crane, pre-fabricated sections and floor slabs were then able to be hoisted into place. These concrete slabs were used primarily on the top seven floors of the structure in order to increase mass so that swaying of the light-weight-timber material could be slowed.

In addition to these construction methods, local sourcing of the spruce for the project was also important. Arthur Buchardt, the project’s initiator, believes that the carbon footprint of the building has been dramatically decreased by using Brummunddal’s forestry and wood processing industries.

Timber Around the World

With the ability to create high-rises out of timber, new sustainable benchmarks can be made. As already seen in the past, the use of CLT and other engineered wood products are becoming more favorable to architects conscious of sustaining the environment and decreasing their carbon footprints. 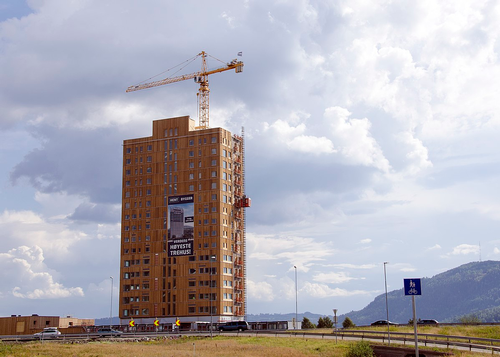 Peter Fiskerstrand, CC-BY-SA-4.0, via Wikimedia
Construction for the Mjøstårnet, an 18-story timber-high-rise, began in September 2018.

With compliance to popularity, the CTBUH recently revised its guidelines to recognize timber as a structural material. Architects in the United Kingdom have also requested that its government make CLT exempt from the ban on combustible cladding materials.

Other future timber endeavors include Penda’s design concept for a residential tower and vertical farm, and Anders Berensson Architects proposed development for 31 wooden skyscrapers to be built in Stockholm. 3XN recently announced its plans for what will be North America's tallest timber office tower in Toronto. And, by 2041, Tokyo plans to be the new home of the world’s tallest timber building.