The study would explore the possibility of constructing a hyperloop that would connect Philadelphia, Harrisburg and Pittsburgh, with a leg to Wilkes-Barre/Scranton. The journey from Philadelphia to Pittsburgh, via the Pennsylvania Turnpike, is roughly five hours.

The proposed hyperloop would cut the travel time to just 30 minutes.

The project was proposed by Republican State Rep. Aaron Kaufer in his House Resolution 1057 back in September 2017, the bipartisan majority overwhelmingly approved the following month.

Currently, there are several firms interested in linking various American cities by hyperloop, and Pennsylvania has been on that list for some time.

In the summer of 2018, The Mid-Ohio Regional Planning Commission announced a partnership with Virgin Hyperloop One, to study the options of building a hyperloop connecting Pittsburgh, Columbus and Chicago.

Months later in February, Hyperloop Transportation Technologies entered into an agreement with the Illinois Department of Transportation and the Northeast Ohio Areawide Coordinating Agency to focus on a system connecting Cleveland and Chicago.

“If those two projects are happening on our two edges, we want to be connected to them here in Pennsylvania,” said Kaufer.

Back when trains were a favored form of transportation, the Pennsylvania Railroad was the largest publicly traded corporation in the world. The innovative system of its time tied major East Coast centers with the Midwest and Kaufer believes, along with others, that Pennsylvania can play that role in hyperloops as well.

“This is a technology that can change us as a state, change us as a region,” said Robert Taylor, chief technology officer of Pennsylvania Turnpike. Taylor also noted on the importance of the state’s obligation to stay abreast of new transportation modes.

With the possibility of a potential route between the seaboard, Great Lakes and following the New York State Thruway, Turnpike spokesperson, Carl DeFebo added that it only makes sense that the Turnpike should study its options.

Since the 552-mile Turnpike System commissions $1.2 billion in annual toll revenue, the hyperloop technology could prove to be a blessing and a curse. On one hand, new revenue would be available if operated in conjunction with the existing network, or with access to the more convenient travel technology, reduced cars and trucks would be driving on the toll road.

“Our interest in it is to take a look at it to see how we can use it to grow our business and what threat it presents to our business,” said Barry Altman, a communication specialist in the turnpike’s technology division.

“We don’t see it as a technology that will supersede our business. We’re looking at it interfacing with what we do.”

“It’s about ensuring the viability of the Turnpike,” DeFebo added. 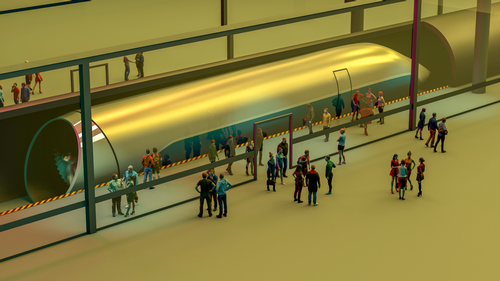 Naeblys / Getty Images
Since the reveal of the hyperloop concept was presented by Elon Musk, founder of Tesla, Paypal and SpaceX, the race for creating the real deal was on.

But, it’s also about the topography of the Keystone State. Experts say that the key to ensuring high speeds and a smooth ride in this type of travel are straight and level lines. Given the state’s terrain, following existing Turnpike and PennDot-maintained highways and Interstates would be more cost effective and easier to construct.

To further promote the Turnpike study and hyperloop testing, the thought of freight lines being developed prior to passenger routes was also discussed by DeFebo. Since a cargo pod wouldn’t require the same level of comfort, technology could be tested and improved prior to testing with human riders.

Not to mention, the exceeding growth of same-day and overnight delivery services by big companies like Amazon and Walmart, might create a demand for faster deliveries verses human transportation.

Since the reveal of the hyperloop concept was presented by Elon Musk, founder of Tesla, Paypal and SpaceX, the race for creating the real deal was on.

In 2016, Bjarke Ingels Group unveiled a sneak-peak of what would be the Hyperloop One system, connecting Dubai to Abu Dhabi in the United Arab Emirates. In 2017, Hypereloop Transportation Technologies began constructing the world’s first full-scale Passenger Hyperloop Capsule. In 2018, Musk's Boring Company completed its first test tunnel.

Designs show that once inside a tube, the transporting pod will be moved by an electric motor. Once the motor has accelerated to proper speed, magnets force the pod to levitate, propelling it forward at an even faster rate. Air is also removed from the tube, resulting in little wind resistance.

Pods are projected to hold about 24 people and are expected to travel over 500 miles per hour. Of course, before passengers can test these pods, the U.S. Department of Transportation will have to issue a safety certification. Because the hyperloop has elements of both airplanes and trains, the decision of which department will handle the certification process has been delayed.

The obligation of AECOM’s four-year contract will be to explore the possibility of constructing a hyperloop that would connect the aforementions points in Pennsylvania.

DeFebo has stated that the commission expects study results to be ready as early as April 2020 and plans to evaluate the feasibility of construction, the potential costs and environmental impacts.

The turnpike’s study is slated to begin next month.