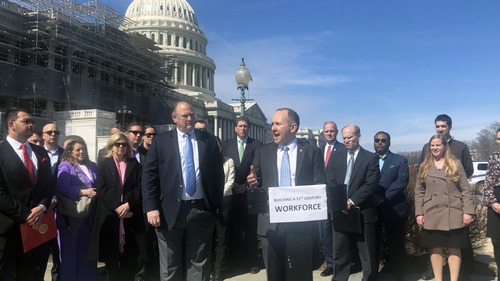 Currently, the law allows legal immigration for high tech, agriculture and seasonal work. Through the new legislation, the visas would establish a first-ever visa program for less-skilled labor.

“Our economy is in the best shape we’ve seen since we unleashed tax reform and eliminated regulatory burdens. Now we must build on that progress,” Smucker said. “By investing in our workforce, we can stay on the right track and keep moving forward.”

Workforce for an Expanding Economy Act

“It is time to reform our outdated immigration laws in order to vet and admit, by means of a work-permit system based on skills and not family relations, the workers our economy needs to grow,” said Rooney.

“The Workforce for an Expanding Economy Act would provide qualified workers for positions that employers are unable to fill. Employers would be required to prove they were unable to find American workers for vacant positions, pay them fair wages based on local wage data and would use E-verify to make sure only legal immigrants are hired. This would greatly benefit the construction and hospitality industries, which are facing severe worker shortages.”

Right now, there are 6.7 million unfilled jobs in the U.S.—including 451,000 manufacturing jobs. Those concerned about the bills are worried about wage reductions, and are looking at why native-born Americans aren’t applying, among other things.

According to reports, most economists are concerned that immigrants might depress wages with unskilled workers. And while statistics from the Center for Immigration Statistics show that immigration is likely to have contributed to wage decrease in jobs requiring a high-school diploma or less in the last two decades, they also showed that the presence of immigrants do not seem to have a negative effect on the wages of jobs requiring a high-skilled occupation.

With unemployment currently at 4.4 percent and a shortage of construction workers, employers are between a rock and a hard place. If they raise wages, it is uncertain if enough people will apply to compensate. While, according to the Bureau of Labor Statistics, construction companies have been struggling to fill 225,000 jobs since early 2018.

The Associated General Contractors of America reported in January that 79 percent of construction companies planned on expanding their workforces this year and were also concerned about not being able to find enough employees to meet their requirements.

This month, Fargo Securities, USG Corp. and the U.S. Chamber of Commerce reported on similar issues. Fargo stated that 47 percent of companies who responded to its latest Construction Industry Forecast survey said that finding qualified employees was their top concern, and 35 percent felt it was its biggest risk faced in the business.

Meanwhile, 70 percent contractors surveyed for the first-quarter 2019 Commercial Construction Index reported that labor shortage had them concerned about deadlines. More than 80 percent of contractors were coping with the shortage by requiring extra work from current employees and 40 percent were turning down work because of the shortage.

“Creating a temporary, flexible worker visa system will allow all types of economic development to proceed without costly delays caused by workforce shortages.”

How Things Will Work

The suggested bills would combine efforts to address not only the worker shortages, but immigration reform as well with the market-driven visa program, which basically approves less-skilled workers only when they're needed.

For instance, for employers that have an unemployment rate of 4.9 or less, U.S. workers are essentially protected, and given access to these available jobs first. However, if an employer’s rate goes back up, they are ineligible to reapply for the immigration workers permit.

In addition, businesses would also gain access to new education and job preparation opportunities through the tax cap and charity efforts.

“This bill creates work for Americans both up and downstream for the U.S. economy,” said ImmigrationWorks USA President Tamar Jacoby.

“Most immigrant workers are different from most American workers and they complement each other to create more jobs in the U.S.”