After little over a year of back-and-forth, developer Related Cos. and the Building and Construction Trades Council of Greater New York have struck a deal that should end the slew of media wars and lawsuits that have come out of a fracture partnership stemming from the construction of Manhattan’s $25 billion Hudson Yards complex.

"Together we have put aside our differences and come to an historic agreement that will benefit the city’s economy and our workforce with good, middle-class construction jobs for years to come,” said Gary LaBarbera, BCTC president.

"This new agreement is a win-win and the start of a renewed partnership to move the industry forward with joint commitments to modernization and competitive models.”

What’s Been Going On?

During the first phase of what’s being called the largest private real estate development in the history of the United States, Related used entirely union contractors. However, at the end of that phase, in March 2018, Hudson Yards Construction LLC, the division of Related that officially filed the complaint, accused the BCTC of misconduct that inflated the construction costs of Hudson Yards by $100 million. 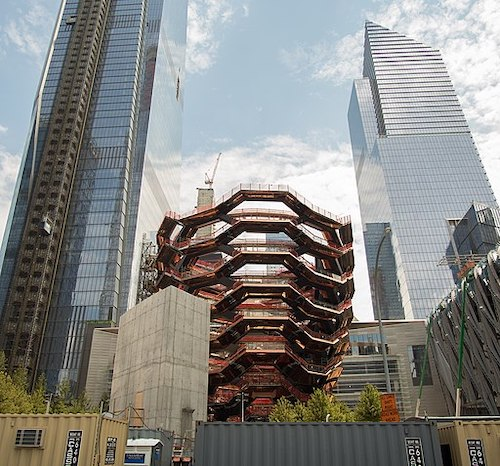 Rhododendrites, CC-BA 4.0, via Wikimedia Commons
After little over a year of back-and-forth, developer Related Cos. and the Building and Construction Trades Council of Greater New York have struck a deal that should end the slew of media wars and lawsuits that have come out of a fracture partnership stemming from the construction of Manhattan’s $25 billion Hudson Yards complex.

Among the accusations are accounts of senior tradesmen being assigned by the Concrete Workers District Council to menial labor, including “coffee boy” duty, a responsibility usually regulated to the most junior member of a unit. In this instance, the suit claimed one of the “coffee boys” was the brother of a high-ranking official. Along with a second “coffee boy,” the individuals charged employees for beverages and food, which made both vendors, rather than the employees they were classified as.

Other allegations in that lawsuit included widespread timesheet fraud, with one worker bringing in $600,000 in annual wages and benefits. Other workers also allegedly inflated their hours by 10 to 20 percent.

As a result, Related (HYC) approached the second phase of construction as open to using nonunion contractors as well.

The lawsuit stated that HYC was justified in deciding that the office building at the Hudson Yards complex would be a project where contracts would be awarded regardless of whether or not the bidder used union or non-union workers.

HYC was seeking at least $75 million in damages in regard to accusations against the BCTC and LaBarbera, for “interference with prospective economic advantage.” HYC is also sought $200,000 in damages because LaBarbera allegedly defamed the company.

The BCTC fired back with other lawsuits, however, including claiming that Related engaged in behavior to intentionally skirt paying union wages and benefits.

In May 2018, a lawsuit was filed in Manhattan Federal Court that alleged that the owner of New York Concrete, John Russo, created an “alter-ego” firm named New Leaf to perform construction work, with the goal of allowing Related to shirk the union wage responsibility.

The unions charged that that scheme was hatched after Related asked the unions to perform work at 50 Hudson for reduced pay, which the unions declined.

Related had released a statement at the time saying: "Union carpenters are currently working on 50 Hudson Yards as a part of New Leaf and this frivolous lawsuit is yet another attempt by Terry Moore, Business Manager of Local 46, to use bullying tactics to try and dictate who gets to have these good paying construction jobs and to deflect attention from his failure to reform corrupt practices and outdated work rules.”

Related reportedly then filed a second lawsuit accusing the BCTC of impeding progress on the Hudson project by refusing to make concrete deliveries. It also struck a deal with the New York City District Council of Carpenters, an agreement independent from BCTC.

While neither entity has commented on what brought them to the bargaining table, both sides call the deal a “win-win.”

Politico reports that the agreement now allows Related to negotiate work contracts directly with individual unions, instead of the overarching labor agreement with the trades council.

“The agreement is a win-win," said Bruce Beal Jr., president of Related, "and reflects our shared values and commitment to good-paying jobs with great benefits, skills training and expanded opportunities and diversity.

“It also is an important step forward in modernizing the industry with creating greater transparency and offers the potential for even more New Yorkers to join this great industry.”

Full details of the agreement have not been disclosed.