Officials of the MLB's Texas Rangers recently released updated renderings of the anticipated $1.1 billion venue, along with details on materials companies that will be used on the project.

Architect Bryan Trubey, executive vice president, director of sports and entertainment for Dallas-based HKS Inc. and principal designer of Globe Life Field, also presented a discussion of the use of Texas-based company materials.

In October 2018, excavation began for the $1.1 billion, 13-acre, 1.7-million-square-foot ballpark. Architects from HKS Inc. took on the design, creating a retractable roof, which was reportedly one of the main reasons for a new venue in the first place. 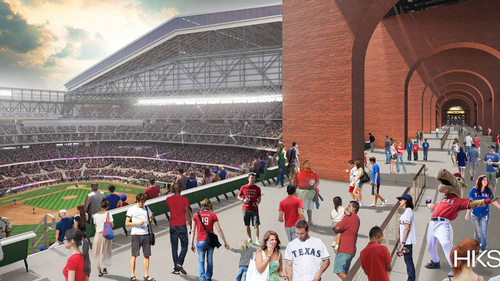 Images: HKS Inc.
Updated renderings of the grand reveal of Globe Life Field on Opening Day 2020 have been released by the Texas Rangers and construction officials.

General contractor Manhattan Construction Co. and landscape architect SWA Group are working together, making sure the project features an asymmetrical design with deep overhangs, giving the impression of an outdoor facility.

Early plans for the field also indicated that materials would be used in the architecture that are unique to Texas. These in-state products would reflect in the use of limestone and brick for various arches seen in the design.

Continuing their partnership, team officials named Acme Brick (Fort Worth, Texas) the official brick of the Texas Rangers and Globe Life Field. Providing about 1 million bricks in 1994’s Globe Life Park called, “Ranger Red,” the company will be providing even more this time around, tweaking the name to “Champion Red.”

“We’ve been partners with the Rangers almost ever since they came to Texas,” said Dennis Knautz, president and CEO of Acme Brick.

“We’ve been season-ticket holders since, I think, 1973. This is another great brick ballpark.”

But, given the name, “Global Life Field,” Trubey wanted to expand beyond Texas production. For that reason, granite for the stadium will be coming from Minnesota, metal panels are being manufactured in Arkansas, insulated translucent panels are being shipped from Illinois and the three-layer ETFE is coming all the way from Germany.

During the reveal, the Rangers and Manhattan Construction took a moment to acknowledge Women in Construction Week. During the stadium project, women will be making up more than 1,200 crafts-people.