Plans for the massive $8.5 billion expansion project at Chicago’s O’Hare International Airport have taken another step forward as the shortlist of architects have all released their first take on designs.

The city, along with Mayor Rahm Emanuel and the Chicago Department of Aviation, unveiled the renderings last week. 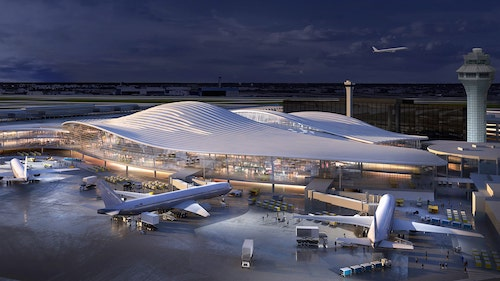 “As the [city] that makes no little plans, Chicago is taking a bold step forward to choose the architect team that will set the course for O’Hare’s biggest transformation yet,” said Emanuel. “This design competition celebrates our tradition of innovation and world-leading architectural history. As we move forward with the O’Hare expansion, we invite our residents and travelers to weigh in on one of the largest terminals in the country.”

The expansion was approved by the city council back in April, with the biggest piece of the puzzle being that the 55-year-old Terminal 2 will be torn down to make room for a new global terminal with wider concourses and gates that could accommodate larger aircraft intended for international flights. Terminals 1, 3 and 5 are set to be renovated, with two new satellite concourses to be built and connected to the new global terminal via an underground pedestrian tunnel.

Fentress-EXP-Brook-Garza Joint Venture Partners – This design features a swooping skylight roof with glass walls, clean lines and a mostly white aesthetic. “Daylight and spatial composition guide passengers intuitively and purposefully. The latest technological advances shape a smart, seamless, comfortable and unencumbered experience,” the company said in its release. “Our vision is to return the romance of air travel to all who pass through Chicago’s O’Hare.”

Foster Epstein Moreno JV Joint Venture Partners – This design also poses a glassy roof that is textured with arches and grids. “Three arches frame the landside of the building, merging into a grand single arch on the airside, thus dissolving the barrier between inside and out and allowing the spectacle of the airfield to be visible to all who pass through the gateway, and recapturing the romance associated with air travel,” the firm said.

Skidmore, Owings, & Merrill – Also going for glass walls and a skylight roof, this design merges some green elements as well. “We infuse the muscular heritage of Chicago architecture and engineering with many lessons from the natural environment, to increase human comfort, save energy and define a distinctive sense of place,” the firm said.

Santiago Calatrava – This firm went above and beyond: In addition to submitting designs for the terminal, the firm also rendered a complex that would remake the site of parking facilities directly adjacent to the space with a white terminal roof extended over some of the outside design. “With a glass façade and dramatic shell-like roof soaring over the approach road, the building unifies the terminal complex while establishing itself as its centerpiece,” the firm said. “Inside, vaulted, light-filled spaces celebrate both the grandeur and simplicity of bygone travel as customers move easily to and from gate areas enlivened by Chicago-focused concessions in an airy, park-like setting.”

Chicago intends to select two design teams: one to design the O’Hare Global Terminal and Concourse and the other to design two new satellite concourses.

An evaluation committee is in charge of selecting the architects, though the members of that committee have not been publicly identified.