An Austin-based company is bringing its 3D-printing technology to the masses, starting with one of the first such homes in Texas.

Firm Sunconomy, along with San Francisco-based Forge New, are preparing to not only lease their We Print Houses system and technology, but are also gearing up to print what will be the demonstration house for the process moving forward.

Larry Haines, founder of We Print Houses, said he intends to build “Genesis” in Lago Vista, Texas, on Feb. 11, and he’s pulling out all the stops. 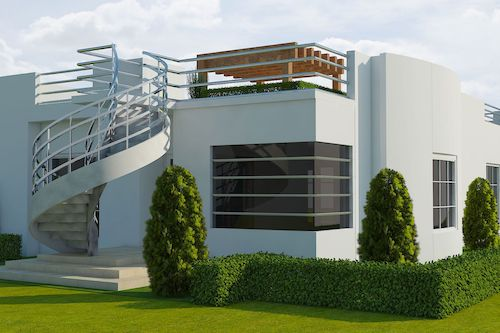 Sunconomy / We Print Houses
An Austin-based company is bringing its 3D-printing technology to the masses, starting with one of the first such homes in Texas.

Haines’ house, according to the San Antonio Express-News, is one of the first in the country in which the entire structure—walls, floors ceilings—are all 3D-printed.

Overlooking the Colorado River, the house will contain three bedrooms,, two bathrooms, a dining room, office space and a kitchen that will all be on the first floor. The living room will reportedly extend from the first floor up to the roof, which will be flat for entertaining and gardening.

The We Print Houses System reportedly uses hydrophobic, self-binding geopolymer cement that not only complies with international building codes but also meets standards that make the homes safe against most natural disasters.

"Because of the materials we use, we don't have to skimp on meeting the standards," Haines said.

"And the maintenance is very low because this geopolymer concrete that we're using is the same the Romans used to build the aqueducts and the ports. Waves have been hitting that concrete for 2,000 years, and it's still there."

The printing system sits on a mobile 30-foot trailer that can move around the job site. There are no size restrictions, according to Haines, other than a three-story limit, and the homes can reportedly be constructed “in a matter of weeks.”

In addition to getting started printing their own homes, the firms are leasing and licensing the home system to builders and contractors across the country. The system includes the aforementioned mobile platform and all the mechanical systems needed to construct designs.

“We have assembled a completely mobile 3D home printing system that any builder or contractor can master in a matter of weeks, and it will completely change their business model,” said Haines. “This system immediately removes the common pitfalls of traditional home building—labor shortages, materials waste, construction time—and rewards you with time and more durable and efficient homes.”

The first 25 licensees will be eligible for a territory-exclusive license, and each licensee will receive on-site training, equipment certification, bi-annual site visits and ongoing marketing support.

All licensees will be mandated to participate in a two-week training and certification program at Genesis.