A mixed-use development—including a Ferris wheel and man-made lagoon—is moving forward in Pittsburgh as new renderings were delivered with an update for the city’s Urban Redevelopment Authority. 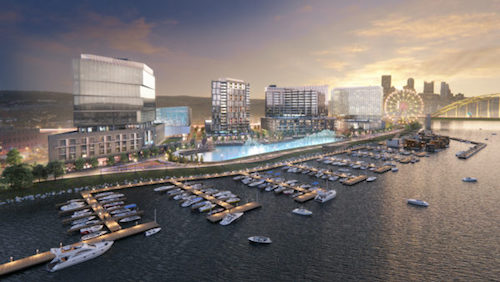 Millcraft Investments
A mixed-use development—including a Ferris wheel and manmade lagoon—is moving forward in Pittsburgh as new renderings were delivered with an update for the city’s Urban Redevelopment Authority.

In addition to the riverfront Ferris wheel and the 2.5-acre crystal lagoon, the development design also includes:

At the URA meeting, the board granted a six-month extension for Millcraft to buy several properties around the riverfront, though construction on the development is slated to start this year.

Millcraft CEO Brian Walker noted that the project is expected to generate $60 million in one-time taxes and fees for the city and $30 million in annual economic impact. It’s also slated to create more than 800 construction jobs and 2,500 permanent jobs.

In addition to working with AE7 on the design, Millcraft has reportedly hired a joint venture between Yates Construction and Massaro Corp. as the general contractor on the project.