Final design images have been released for London’s Holocaust Memorial project, which is slated to take shape in the Victoria Tower Gardens, beside the Houses of Parliament. 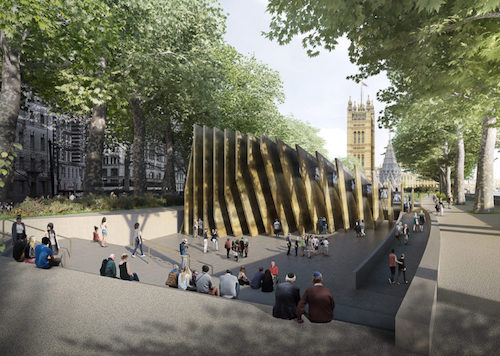 The team was selected late last year after the United Kingdom launched an international design competition that saw 92 entries. Ten esteemed finalists were chosen, including:

Led by Sir David Adjaye, the design features 23 tall bronze fins with the 22 spaces in between them representing the 22 countries in which Jewish communities were devastated during the Holocaust.

“Entering the Memorial will be a sensory experience,” the firm’s design description notes. “While the outside and inside space emphasizes collective gathering, the 23 bronze fins require the visitor to enter in solitude and isolation, providing a highly individual pathway and experience.

“Each path eventually leads down into the threshold—a generous hall which acts as a place of contemplation and transition into the Learning Centre below ground. The learning center includes a ‘hall of testimonies’ and a ‘contemplation court’: a silent, reflective space with eight bronze panels. On leaving the memorial, the circulation route ensures visitors will emerge to see the classic uninterrupted view of Parliament—and the reality of democracy.”

Adjaye said the team wanted to create a monument that showed the complexities of the history.

“The complexity of the Holocaust story, including the British context, is a series of layers that have become hidden by time," he explained. "Our approach to the project has been to reveal these layers and not let them remain buried under history. To do so, we wanted to create a living place, not just a monument to something of the past. We wanted to orchestrate an experience that reminds us of the fragility and constant strife for a more equitable world.”

The project received pushback from residents, saying it would destroy the park and would work better located by the Imperial War Museum in south London.

Adjaye has responded to those claims, though, saying that Holocaust deniers have “festered in the U.K.” and that it needs to be next to Parliament.

The planning application is slated to be formally reviewed in the coming weeks. The monument still has a completion date set for 2021 and a price tag of $66.2 million of public funding.