Online retailer Amazon recently posted a policy update that effectively prohibits the sale of paint strippers that contain methylene chloride and n-methylpyrrolidone, joining the growing list of manufacturers and distributors that have banned the chemicals.

PPG, Kelly-Moore and The Sherwin-Williams Company, as well as The Home Depot and Lowe’s, have all recently announced the phasing-out of methylene chloride and NMP.

PPG spokesperson Mark Silvey confirmed to Bloomberg in October that the manufacturer has removed the two chemicals from almost all of its paint removers and is working to eliminate them from a few products that are still being sold outside the U.S. and Canada. 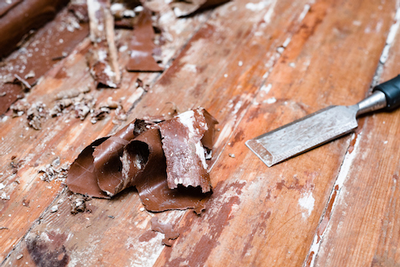 Aleksandr Volunkov
Online retailer Amazon recently posted a policy update that effectively prohibits the sale of paint strippers that contain methylene chloride and n-methylpyrrolidone, joining the growing list of manufacturers and distributors that have banned the chemicals.

In June, Sherwin-Williams and Home Depot announced that they would be discontinuing paint strippers that contain the products. Lowe’s announced the same news a month before that.

Sherwin’s decision came after a letter was penned to the company—by groups including the Natural Resources Defense Council; Safer Chemicals, Healthy Families; and Mind the Store—urging Sherwin to “take immediate action to phase out the sale of paint removers that contain the chemicals methylene chloride and N-methylpyrrolidone (NMP).”

Sherwin announced the changes via a memo from Corporate Communications Director Mike Conway, as well as with a tweet, which said, “Our customers are our #1 priority at Sherwin-Williams, so we are eliminating methylene chloride paint strippers from our stores. We have several effective alternatives available to serve your project needs.”

Last month, a group of environment and public health advocates informed the Environmental Protection Agency of its intent to sue the agency over its failure to finalize a ban on the two chemicals in paint strippers.

The group, which is also joined by the mothers of two men who recently died from methylene chloride exposure, says that the EPA has violated its public commitments and legal obligations to finalize the ban.

The group’s action refers to the Toxic Substances Control Act, which requires the EPA to regulate chemicals that present an unreasonable risk to human health or the environment. In January 2017, the Obama administration determined that methylene chloride places consumers, workers and bystanders at an unreasonable risk of injury and proposed to ban its use in paint strippers.

In May 2018, the EPA promised to finalize that ban, but it has taken no action since then. At the time, the EPA said that, as part of its requirement in the switch from the Lautenberg Chemical Safety for the TSCA, it was nearing completion of the Problem Formulations portion of a review of 10 specific chemicals, and has made a decision on methylene chloride.

The update said that the EPA:

The previous risk assessment that the announcement referred to was the January 2017 determination, when the agency proposed prohibiting the consumer and commercial paint-stripping uses for the chemical.

At that time, the EPA said that dangers with regard to methylene chloride include death (due to asphyxiation), liver toxicity, kidney toxicity, reproductive toxicity and certain cancers.

“Some of these health effects result from a very short, acute exposure; others follow years of occupational exposure,” the EPA noted.

The 2017 277-page proposal called for a prohibition on the manufacture (including import), processing and distribution of these chemicals in commerce.

The proposal also talked about restricting the sale of small-volume products and requiring companies to notify retailers and others in the supply chain regarding such prohibitions.

“EPA’s inaction on this admittedly deadly chemical is unsafe and unlawful. The law does not allow [the] EPA to drag its feet while lives hang in the balance,” said Earthjustice attorney Jonathan Kalmuss-Katz, counsel for the Labor Council for Latin American Advancement, a party in the forthcoming lawsuit.