The investigation of the cracks found at San Francisco’s SalesForce Transit Center is ongoing after the Transbay Joint Powers Authority called for a complete structural evaluation of the building.

All officials are still waiting for test results from sample beams, which are expected back later this month, while the transit center remains closed.

On Sept. 25, workers discovered a cracked steel beam in the third-level bus deck of the $2.2 billion Transit Center, just six weeks after the structure opened to the public. The next day, another fissure was found on an adjacent beam. 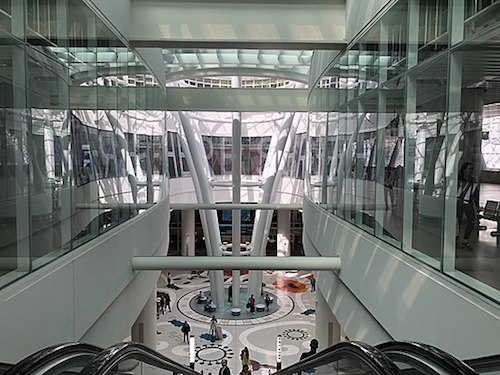 Fullmetal2887, CC-BY-SA 4.0, via Wikimedia Commons
The investigation of the cracks found at San Francisco’s SalesForce Transit Center is ongoing after the Transbay Joint Powers Authority called for a complete structural evaluation of the building.

The beams are part of the support system for the 5.4-acre rooftop garden and park, which includes a 5-foot layer of soil.

According to the Engineering News-Record, the bottom-flange cracks are near the 8-foot-deep midspan of each shop-welded girder. In the structure, the hanger plate slots through the bottom flange.

Skanska USA Civil West was the structural steel engineer on the project, and the beams in which cracks appeared were manufactured by Herrick Corp. Oregon Iron Works made girders and basket columns, while XKT Engineering fabricated some of the transit center’s “seismic load resisting system.”

General contractors Webcor and Obayashi managed the center’s construction, which lasted from August 2010 to August 2018. The architect was Pelli Clarke Pelli, with Thornton Tomasetti serving as structural engineer.

In early October, the TJPA confirmed that the shoring systems for the cracked sections were complete, making way for technicians to get in to take samples for analysis at LPI Inc., a laboratory in New York. Testing includes scanning electronic microscopy, Charpy V toughness tests, Rockwell hardness tests, tensile tests, fractographic analysis and metallographic analysis, according to the ENR.

During a Nov. 8 meeting for the TJPA board of directors, members called for an inspection of the entire structure to ensure that there were no structural issues in additional to the two cracked beams.

"We must assure a thorough and independent review," said Mark Zabaneh, executive director of the owner, the Transbay Joint Powers Authority, at the board meeting, according to the ENR.

Zabaneh was referring to the review, which includes a panel of 25 experts, in addition to five structural engineers.

Once there’s a verdict on what caused the cracks, engineers will design a permanent fix that will also be peer-reviewed. TJPA has already estimated that repair work is to begin next month and go into the new year.