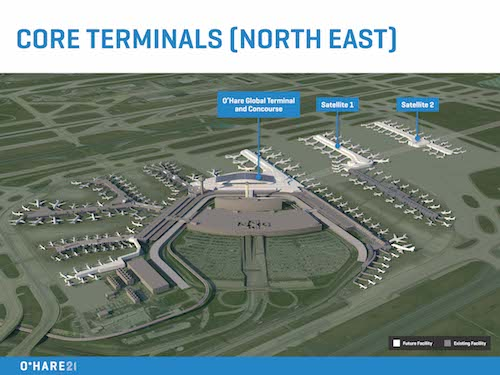 The expansion was approved by city council back in April, with the biggest piece of the puzzle being that the 55-year-old Terminal 2 will be torn down to make room for a new global terminal with wider concourses and gates that could accommodate larger aircraft intended for international flights. Terminals 1, 3 and 5 are set to be renovated, with two new satellite concourses to be built and connected to the new global terminal via an underground pedestrian tunnel.

The shortlisted teams are now invited to participate in a Request for Proposal for Lead Architectural Design Services. Through the RFP process, this winter, each team will submit a design model that will be showcased at various locations throughout the city.

In the coming months, the city will seek public feedback on the design concepts presented by each of the finalist teams.

“Through this once in a lifetime opportunity, the City of Chicago is inviting the global design community as well as the voices of residents to enhance the future of Chicago-O’Hare,” said Commissioner Jamie L. Rhee.

“As we work to elevate O’Hare to compete globally, we have asked teams for a commitment to mentoring small local firms, too. In doing so, our goal is to involve Chicago’s business community in an unmatched opportunity to gain valuable experience on a project of international proportions.”

Transportation, business and civic leaders from the city will make up the official selection committee with additional advisors leading architectural firms, cultural and academic institutions and local businesses also providing their recommendations.