Turbine Blades Made with Polyurethane Resin

According to Covestro, the spar cap and shear web of the 55.2-meter-long (just over 181-feet-long) blades for the 2 MW wind turbine are located at a wind farm in Tieling, Liaoning Province, northeast China. The wind farm is operated by Liaoning Datang International New Energy Co., Ltd.

Covestro tested the blades before they went on to pass the static test and fatigue tests, both edgewise and flapwise, conducted by China General Certification. Customarily, turbine rotor blades are made out of fiberglass-reinforced resin. Polyurethane composite, commonly used in this kind of work, is known for its mechanical properties and anti-fatigue performance. There are also the added benefits of a faster curing process and better processing properties. 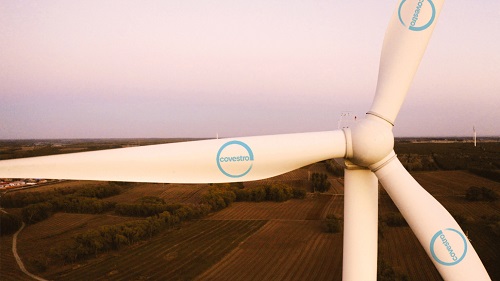 "The successful installation of the pilot turbine in northeast China is recognition of the strengths of our polyurethane infusion resin and demonstrates that it is ready for use in operational wind blades,” said Julien Guiu, Vice President Industrial Marketing APAC, Polyurethanes Business Unit, Covestro.

“We hope that this gives a strong signal to our industry partners to manufacture and install longer, stronger wind blades."

Covestro’s polyurethane infusion resin is also now in action in a 2.2 MW turbine with 59.5-meter-long blades, whose spar cap, shear web and blade root were fabricated with the company’s material. The turbine was installed in South Central China.