Geese Soar on Tank of the Year Winner

Breaking with tradition, Tnemec Company Inc. named in an emailed press release two water towers in Katy, Texas, painted with murals of geese taking flight, as the winners for this year’s Tank of the Year competition. The People’s Choice award went to an elevated water tank in Cayce, South Carolina, that features the city’s rebranded logo.

The Tank of the Year winners are a pair of legged municipal water tanks that beat out over 260 other competitors to take this year’s top honors.

The pair of 135-foot-tall water tanks were painted by brothers Rolf and Peter Goetzinger of Spokane, Washington. The brothers used a HydroFlon fluoropolymer coating system to paint the murals; geese were chosen to be featured due to often being found on the Katy prairie during the winter. According to a press release from the city, the brothers have been painting murals for over 20 years. 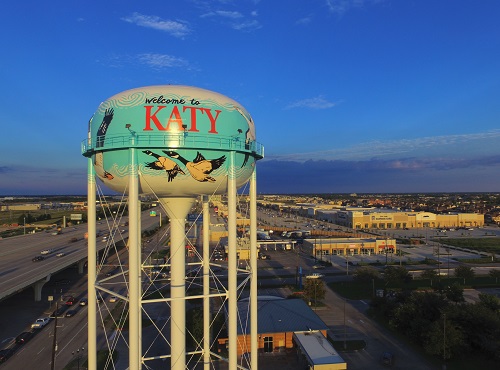 Photos: Tnemec
Breaking with tradition, Tnemec Company Inc. named in an emailed press release two water towers in Katy, Texas, painted with murals of geese taking flight, as the winners for this year’s Tank of the Year competition.

The winners were selected “by a panel of water tank enthusiasts based on criteria such as artistic value, significance of the tank to the community and challenges encountered during the project,” according to Tnemec.

In addition to the judging panel, each year Tnemec also invites the public to vote to determine the annual People’s Choice winner.

This year, the honor went to a 1-million-gallon water tank in Cayce, South Carolina, featuring the city’s rebranded logo, winning 7,669 votes. The tank will appear with the 11 other finalists in Tnemec’s annual water tank calendar.

“The Cayce logo is positioned above a blue wave pattern symbolizing the city’s location on the Congaree River,” said Doug Hansen, Director of the Water Tank Market for Tnemec.

“The logo design was the result of a cooperative effort involving several creative citizens who volunteered their time and ideas. Standing 144 feet high, the tank towers over surrounding structures and trees and is illuminated at night so it can be seen from a long distance.”

This was the 13th anniversary of the competition, noted Hansen. “Nearly 270 water tanks were nominated, and more than 30,000 online votes were cast this year from across the U.S. and Canada. This year’s finalists represent several different types of water tanks including legged designs, composite constructions, ground storage tanks, pedestal styles in various shapes and sizes as well as tanks used to store methane captured from sewage treatment.”