New research, completed by Michael Clarke, a mechanical engineer at the Fleet Readiness Center Southeast, in Jacksonville, Florida, recently revealed that more blasting media could be reclaimed with a reduction in cross-draft velocity in blasting booths.

Clarke is on the board of the American Conference of Governmental Industrial Hygienists industrial ventilation committee, which publishes the “Industrial Ventilation Manual.” The group “sets the standards that U.S. companies and the Department of Defense adhere to,” according to Clarke, and it will be changing the relevant guidance based on his findings.

Clarke noted that in 2013, he noticed that those doing blasting quickly ran out of media, and replacing the material so often was expensive. 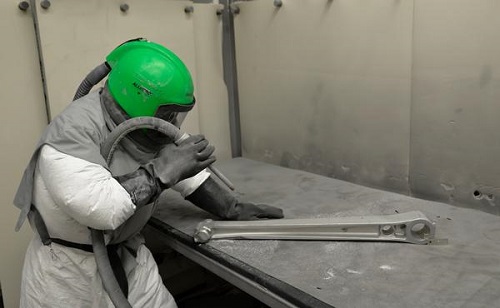 U.S. Navy
New research, completed by Michael Clarke, a mechanical engineer at the Fleet Readiness Center Southeast, recently revealed that more blasting media could be reclaimed with a reduction in cross-draft velocity in blasting booths.

During blasting, the artisan, working in a blast booth with a grated floor, directs the blast to wherever desired. These workers wear specific Tyvek suits and air abrasive blasting helmets due to many of the coatings being removed containing heavy metals. A cross-draft air flow, created by fans, helps ensure a safer, clearer environment inside the blast booth. Traditionally, both the used media and the blasted coatings are drawn into a filter system before being stored in hazardous material containers. Media that can be reused should fall through the grates in the floor.

Clarke had an idea, however, and working with process engineer Cory Skinner, he used aluminum oxide, plastic and glass beads as abrasives, according to Skinner.

“They were all getting sucked into the filters to one degree or another, but the glass bead was the worst because it’s so light," Skinner said.

Upon hitting the part, the glass bead shattered, which resulted in the material getting sucked out.

In his research, Clarke found reducing the 100 feet-per-minute cross-draft velocity to 60 feet-per-minute increased media reclamation while not cutting down on visibility. Since workers are already equipped with respirators, this would also have no impact on safety.