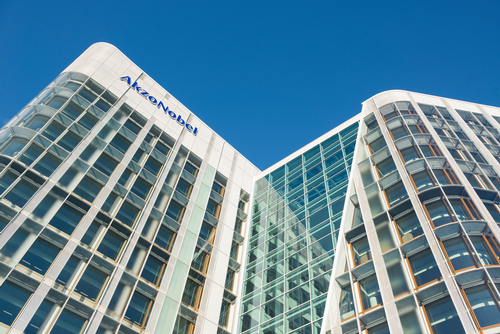 The company also noted that it is delivering toward its “Winning Together 15 by 20” initiative, which kicked off in July, and aims for the company’s ROS to his 15 percent and its ROI to be greater than 25 percent.

ROS for the Decorative Paint segment was up at 12.1 percent (9.4 percent in 2017), with 5 percent positive price/mix driven by pricing initiatives, the company said. Adjusted operating income also increased to 115 million euros (up from 95 million in 2017). Revenue was 6 percent lower, however.

Akzo noted that the higher income was aided by higher prices and cost savings that more than compensated for the raw material costs, which the industry has been dealing with for some time.

Decreases in revenue were also seen in the regional subsegments including EMEA (3 percent drop), Latin America (9 percent) and Asia (9 percent).

Also in this segment’s quarter, AkzoNobel completed acquisitions of Xylazel in Spain, and Fabryo in Romania.

“Profitability increased for both Paints and Coatings as a result of our pricing initiatives and cost-saving programs,” said CEO Thierry VAnlancker.

“We also continued to build on our leading positions in the paints and coatings market with the acquisitions of Fabryo in Romania, Xylazel in Spain and expansion of our Dulux Decorator Centre network in the U.K.”

ROS for the Performance Coatings segment was also up at 12.2 percent (10.3 percent in 2017) with higher selling prices contributing to a price/mix of 7 percent. Adjusted operating income was up 23 million euros—from 147 million to 170 million. Volumes continued to be down across the board, with a 3 percent drop in this segment.

Revenue was up in one subsect of the segment: Powder Coatings, which saw a 6 percent bump. All other sects, however, saw decreases including Marine and Protective Coatings (8 percent), Automotive and Specialty Coatings (1 percent) and Industrial Coatings (4 percent).

Vanlancker noted that completing the sale gets the company a step closer to its overall goals.

“Completing the sale of our Specialty Chemicals business was a key milestone in the long and proud history of AkzoNobel as we take the next step in our transformation, delivering towards our Winning Together: 15 by 20 strategy,” he said.

The company noted that while demands and trends differ between regions and segments, it expects to continue seeing raw material inflation through the remainder of 2018. However, the company added that it has taken significant steps via pricing initiatives and cost-saving programs to offset the raw materials challenge.

“We made further progress towards becoming a focused, high performing, paints and coatings company thanks to the continued efforts of our dedicated organization,” Vanlancker said.

“I’m encouraged by what we achieved, despite challenging market conditions, including higher raw material costs and adverse foreign currencies.”