Several months after a retrofit repair for the Millennium Tower was proposed, a new issue has come to light: Cracks have appeared in a 36th-floor window, sparking concerns over whether the damage is local or if it is symptomatic of a more widespread issue.

Allana Buick & Bers, an architecture and engineering firm hired by skyscraper residents, has yet to determine what caused the damage. The issue could stem from structural issues, a material defect or it could be a one-off event.

The Millennium Tower, most known for its sinking and settling issues—has sunk at least 17 inches and tilted 14 inches to the west and 6 inches to the north. In January, a 10-week-long exploratory drilling project evaluated a micro pile fix for the problem.

According to the San Francisco Chronicle, the 58-story tower sits on a 10-foot-thick mat foundation, held in position by 950 reinforced concrete piles that are sunk 60 to 90 feet into clay and mud but do not reach the bedrock.

To fix the leaning issue, engineers are suggesting boring 275 to 300 steel and concrete “micro piles” down to bedrock, only on one side of the building at a time, starting with the west side. Once the structure is stabilized, the east side would be allowed to sink until the building straightens itself. Then, micro piles would also be driven into that side, preventing the structure from sinking any further. Repairs are slated to take two to five years. 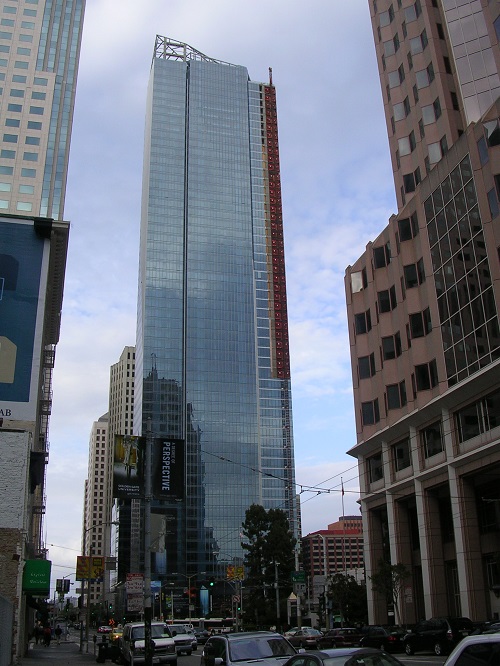 Hydrogen Iodide, public domain, via Wikimedia Common
Several months after a retrofit repair for the Millennium Tower was proposed, a new issue has come to light: Cracks have appeared in a 36th-floor window, sparking concerns over whether the damage is local or if it is symptomatic of a more widespread issue.

In addition to the sinking and tilting of the entire tower, residents have also complained of “unexplained odors permeating their luxury units," which led to an investigation of the building's envelope.

Allana Buick & Bers' report regarding the cracked window, filed on Sept. 7 with the city’s Department of Building Inspection, noted that someone would rappel down the building to photograph the crack and tape it up as a safety precaution. The firm was only able to inspect the cracks from the interior at first.

“The fact that this piece of glass may have failed due to the building tilt may be a localized defect or potentially be more widespread,” the firm said in its initial report. “Further investigation of the building exterior is required to understand and assess the issue.”

The city of San Francisco made a number of demands of the tower management team—including the repair of a window-washing crane that would allow for exterior inspection—to accommodate further evaluation of the damage.

Other demands included installing an overhead protection system around the perimeter of the tower to protect passersby from falling glass, and surveying additional units for other cracking or damage.

A report issued from a firm hired by management, sent to residents, called the cracking a one-off problem. The same email also noted that previous window breakage along the tower was unrelated to the building settling.

The inspection was completed on Sept. 18, where a unit above the damage was also examined to see if the tower's tilt was a contributing factor. Testing focused on the steel and glass facade as well as the removal of drywall, the window stool and the baseboard. According to attorney Tom Miller, partial focus is on the clips that connect that facade to the building.