As Hurricane Florence, downgraded over the weekend to a tropical depression, works its way through the Mid-Atlantic and out to sea as a weakened force, the picture of the devastation the storm wrought in the Carolinas is just beginning to come into focus, with one analytic firm making the early prediction that the storm could cause a total of $17 billion to $22 billion in property damage and econmic impact.

When Florence made landfall Friday (Sept. 14), it brought sustained winds of 90 mph and over the weekend the storm dumped upwards of 20 inches of rain in some parts of North Carolina. Roads throughout North and South Carolina were washed out or closed due to flooding. A stretch of Interstate 95, a vital link up and down the East Coast, was closed near the border between the two states as of Monday.

The storm's death toll rose to 23 by Monday afternoon.

Several dams were thought to be in danger due to the heavy rains, though none had failed as of Monday; authorities had prepared to evacuate citizens near the Cheraw State Park Dam in South Carolina over the weekend before the rains slowed.

North Carolina's Headwaters Dam was under threat of imminent failure on Sunday night, but as of Monday, the dam was labeled "fine" by Ashe County Emergency Management officials.

Wastewater facilities in some locations discharged, including a plant just south of Wilmington, which lost power and backup power Friday and spilled some 5.25 million gallons of wastewater into the Cape Fear River. 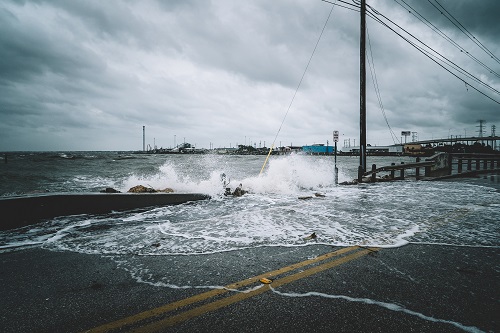 Eric Overton/Getty Images
As Hurrican Florence, downgraded over the weekend to a tropical depression, works its way through the Mid-Atlantic and out to sea as a weakened force, the picture of the devastation the storm wrought in the Carolinas is just beginning to come into focus, with one analytic firm making the early prediction that the storm could cause a total of $17 billion to $22 billion in property damage and econmic impact.

Flooding around Duke Energy's nuclear plant in Brunswick, North Carolina, left some workers stranded at the facility as of Monday (Sept.17). The employees are not in any immediate danger, but the emergency level for the plant has been raised to an "unusual event," the lowest level on the emergency ranking.

Before the storm arrived, environmental officials urged dam owners to drop water levels and property owners to clear drainage areas. Tommy Crosby, spokesman for South Carolina's Department of Health and Environmental Control, noted that 250 dams had been inspected so far.

Repairing roads in South Carolina since the damage caused by 2015 and 2017 hurricanes has been an ongoing issue, given that funding remains uncertain. In 2016, lawmakers approved a one-time, $400 million financial infusion toward road repair. In 2017, the first gas tax increase in 20 years was passed, which provided roughly $600 million annually for infrastructure repair, once fully implemented. According to Pete Poore, spokesperson for the state Transportation Department, the agency has 3,200 workers across the state ready to assist by repairing broken traffic lights and barricading problem areas, along with whatever else needs to be done to increase road safety.

In Charleston, South Carolina, all eyes were on bridges, especially since the closure of the westbound lanes of Interstate 526 due to the snapping of a support cable in May. Water had reportedly seeped into the structure, causing corrosion. Repairs were made. A review of bridge records was ordered shortly after. Concerns were raised over the ability to evacuate James, Johns and Wadmalaw islands in a timely fashion if a bridge failed.

"Just because it stops raining after the event, and the sun comes out, don't assume the roads are good to go," Poore said. "We want to know if there any land areas that are going to be flooded, any community where people are living, to make sure they're not cut off or surrounded by water."

Though there was little danger of collapse for the states' major bridges, the structures aren’t designed "to accommodate three to four feet of rain at a time,” according to ASCE president Wayne Klotz.

"We've underinvested in all these resources for the last couple of decades. We didn't keep up in terms of operations and maintenance," said Director of Infrastructure at Bipartisan Policy Center Michele Nellenbach.