The Kiel team, which published its findings in Journal of the Royal Society Interface, developed a coating with a surface microstructure that they refer to as a “re-entrant mushroom-shaped surface topography.” The surface structure, with micro- and nanoscale discs sprouting out of the surface like tiny toadstools, repels liquids “almost independently of the material’s inherent wettability,” the researchers say. 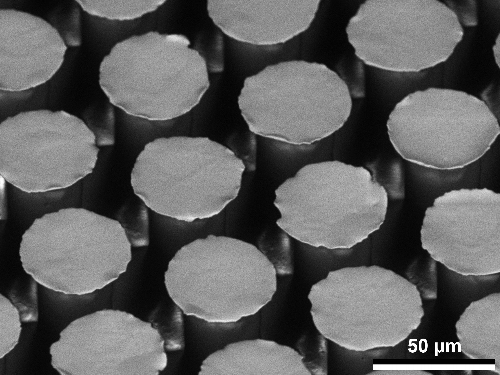 © Lars Heepe
The Kiel team developed a coating with a surface microstructure that they refer to as a “re-entrant mushroom-shaped surface topography.”

That means barnacles, which use a “cement” they secrete in order to bond themselves to underwater surfaces, can’t quite adhere. Testing on yachts has thus far shown the coating to be effective; trial runs on four yachts for one season showed that the sections of boat hull painted with the silicone coating were not affected by barnacles. Evidence that some barnacles had attached initially but failed to stay on the surface permanently backs the idea that the foul-release coating prevents long-term bonding.

The team also tested the coating using polyvinyl siloxane (commonly used as a dental adhesive) as a “pseudobarnacle” cement, mimicking the bonding of the barnacles’ natural glue. Analysis of the adhesive’s bonding to the surface covered in the “mushroom-shaped microstructures” in comparison with the same surface covered with “micropillars” without the toadstool-style discs showed that the mushroom coating prevented the glue from bonding with as much of the surface.

The researchers say in their report that, in addition to preventing barnacles from accumulating permanently, the coating creates a condition in which barnacles that do manage to attach can be easily removed without leaving cement behind as they do on harder surfaces.

The research is one of a number of recent studies to look at how nanoscale topography could help to prevent biofouling on marine structures without traditional biocides.

Researchers at the University of Sydney Nano Institute published work earlier this year suggesting that coatings with “nanowrinkles” based on the structure of the pitcher plant could help hulls to shed certain marine bacteria.