Named the overall winner of the New London Awards 2018, the massive five-year, 1-billion-pound ($1.3 billion) project to update the London Bridge Station recently wrapped up, giving a new lease on life to one of the oldest stations in the world.

Dating back to 1836, the London Bridge Station was developed as “a shared terminus by competing railway companies battling for routes into London,” according to Architects' Journal. 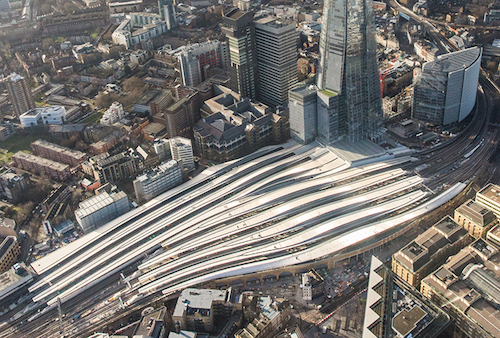 The station never had a prominent facade and was underwhelming, especially for the number of passengers it serves—about 50 million a year, the fourth-busiest station in the United Kingdom.

The initial plans for the overall 6-billion-pound government-sponsored Thameslink (the main line in the British system) upgrade were announced in 2007 and architecture firm Grimshaw (along with engineering firms Arcadis and WSP) was tapped for the London Bridge Station portion of the project in 2013.

The main goals for the project included newly configured rail lines, platforms with step-free access, a new concourse, new entrances and a reworked connection to the underground network.

To do this while the station was kept in service, workers used an abundance of off-site construction and took down a pair of platforms at a time; the brick substructure was demolished, and then the platforms were reconstructed in concrete and steel and put back into service.

The new focal point of the station is the new concourse, which runs the full width of the tracks above and will be able to accommodate the estimate growth in travelers—which will reach up to 90 million a year.

Open fissures in the concourse soffit allow for natural lighting, inspired by Grand Central Station in New York. The masses of steel and concrete are complemented by ribbed Western red cedar panels that form the soffit.

Early last month, the project received the Overall Winner prize at the New London Awards (which saw 30 projects crowned winners of 15 categories) as well as the Sustainability Prize.

"The successful delivery of London Bridge station is a highly complex feat of design and engineering," Mark Middleton, partner at Grimshaw, said in a statement.

"As architects, our vision for the station was to create a great civic space that connected two communities, and respected its Victorian heritage whilst providing a modern, functional and enjoyable experience for train passengers."