Thanks to cracks found in a section of concrete on the Pensacola Bay Bridge, construction on the $398.5 million project has been delayed twice over the past several months, raising concerns, especially given the collapse of the pedestrian bridge at Florida International University earlier this year.

Florida Department of Transportation officials said the cracks were found during a routine visual inspection of concrete that had been set in March.

According to FDOT, the Pensacola Bay Bridge project will consist of a new U.S. 98 bridge across the bay between Pensacola and Pensacola Beach, running parallel to and west of the existing span. U.S. 98 is known as an important east-west transportation corridor and a primary hurricane evacuation route.

The current span, constructed in 1960, is reaching the end of its lifespan. With only four lanes and minimal auxiliary lanes, both traffic congestion and removal of disabled vehicles pose their own challenges. Analysis determined that replacing the Bay Bridge was more cost-effective than rehabilitation. 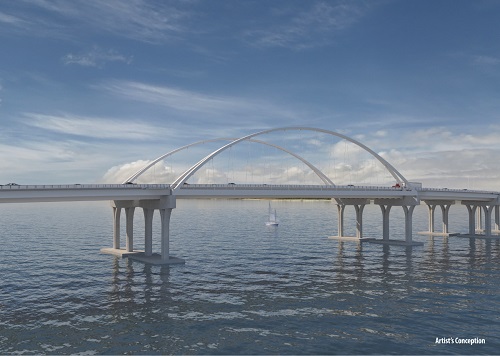 Florida Department of Transportation
The new bridge will be two separate structures: one for eastbound traffic, the other for westbound, with three 12-foot travel lanes, a 10-foot-wide path for foot and bicycle traffic and ten feet inside and outside shoulders.

The new bridge will be two separate structures: one for eastbound traffic, the other for westbound, with three 12-foot travel lanes, a 10-foot-wide path for foot and bicycle traffic, as well as ten feet inside and outside shoulders. Pedestrians will be able to use shaded observation areas to take in views of the bay.

Work is being funded by FDOT. Skanska USA Civil Southeast Inc. is serving as the design-build team, with Eisman & Russo building and engineering the project.

FDOT spokesperson Ed Seifert said that the cracks that are causing the construction delay were found on part of a concrete bridge deck that cracked during hardening. Work on the bridge deck concrete pavement was stopped from April 5 to 16 and again from June 26 to 27, with other construction continuing.

Skanska USA must complete the eastbound lane by January to earn a $15 million bonus. Seifert confirmed that the company is on track to complete the project on time.

State Sen. Doug Broxon, R-Gulf Breeze, noted that he had not been made aware of the cracks, but that cracking in concrete in projects this size is not unusual. He later learned that in this case, the cracks were caused by the concrete curing incorrectly.

Concerns are running high due to what some have characterized as FDOT’s lack of transparency on the project, especially since the collapse of the pedestrian bridge at FIU earlier this year.

"The news of possible construction defects with the bridge leads me to think that an independent inspection team should be brought in by FDOT to evaluate the defects," said Gulf Breeze Mayor Matt Dannheisser.

"In recognition of the tragic consequences of bridge defects such as what occurred at FIU, the Florida Department of Transportation now needs to go above and beyond to assure the public that the new Pensacola Bay Bridge will be safe.”