Five years after the new Bay Bridge eastern span opened in San Francisco, bridge-painting waste is at the center of a budding conflict over continuing site cleanup.

At a meeting late last month of the Toll Bridge Program Oversight Committee, a multi-agency consortium that oversees the bridge, California Department of Transportation officials briefed executives on the state of Site 11, a U.S. Navy-owned area of Yerba Buena island used for access during the 12-year-long construction project. Caltrans could be on the hook for a significant portion of the cost of cleaning up the site despite the fact that it was already in need of remediation before the project ever began. 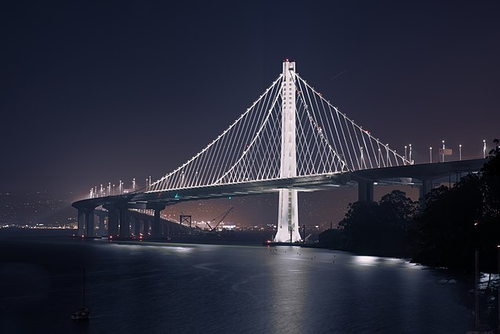 Dllu, CC BY-SA 4.0, via Wikimedia Commons
Cleanup at a site related to the $6.5 billion Bay Bridge eastern span replacement is at the center of a conflict that's brewing between Caltrans and the U.S. Navy.

The site, which had been used as a landfill for household waste when the Navy occupied the area before a base closure in 1997, is one of three Navy-owned parcels taken by Caltrans for access to build the new eastern span starting in 2001. According to Caltrans environmental manager Hardeep Takhar, who spoke at the June 21 meeting, the Navy was in the process of remediating the site for future civilian use when Caltrans took control of it at the beginning of the bridge project.

Now, some 17 years later as demolition winds down, the agency is preparing to turn the land back over to the Navy when it completes its pier retention project in the area. Takhar notes, though, that Caltrans may be responsible for some of the cleanup at the site due to waste from bridge-painting and other construction activities; the estimate given to the committee at the meeting was between $5.5 million and $11 million, the projected total cost of cleanup at the site.

According to a 2015 Navy report, Site 11 was documented as a landfill as far back as 1935, and more recent testing before the bridge project began found construction debris and petroleum-contaminated sand at the site. The 2015 document stated that the area "may be contaminated by lead and other metals as a result of vehicle emissions, as well as bridge and ramp painting and maintenance." It added that "construction activities associated with the new Bay Bridge have greatly altered the landfill surface, which is currently being used by Caltrans as a laydown area for bridge construction materials."

The possible $11 million price tag, a risk taken on because there seems to have been no concrete agreement between the Navy and Caltrans regarding the responsibility for cleanup, raised concerns for some on the committee, including Bay Area Toll Authority executive director Steve Heminger, who brought up bad blood between the Navy and Caltrans over the Bay Bridge project stretching back years.

“The United States Navy owned the property we needed to build the bridge and it refused to turn over the property to the department so it could even [provide] access for department personnel to drill test pilings,” Heminger said at the meeting.

Heminger questioned the seriousness of the waste left behind by Caltrans in comparison with the dump left by the Navy, calling the agency’s contribution to the mess “a few drops of paint.”

The bill is far from final, however. One Caltrans official said the agency plans to begin negotiations with the Navy this fall in relation to the cleanup effort at Site 11, noting that it’s possible the agency may have “accepted more [risk] than we should have,” but that Caltrans’ legal team disagrees with that notion.

Caltrans also reached an agreement last month with bridge contractor American Bridge/Fluor, which had sued the agency for $40 million in part because it said Caltrans specified the steel rods that failed early in the bridge’s life. The settlement, according the NBC Bay Area, involves Caltrans paying $25.5 million to the joint venture and forgiving an $8.5 million fine it had levied on the contractor.

After numerous delays and cost overruns, the Bay Bridge replacement came to a cost of $6.5 billion, an incredible 25 times the original cost estimate, in 1995, of $250 million.

Problems with the bridge have included the faulty anchor rods, rainwater leaks, concerns about corrosion on the main cable and questions about the strength of the steel used in its construction.

The old eastern span of the Bay Bridge was replaced due to concerns about its safety under earthquake conditions; part of the span infamously collapsed during 1989’s Loma Prieta earthquake, killing one driver. While the western span—a suspension bridge reaching from San Francisco to Yerba Buena—was retrofitted for seismic durability, Caltrans determined.