The WeatherBloc-HRC Coating combines thermal insulation with reflective paint, which the company says allows for dependable protection even on dirty surfaces or cloudy days. 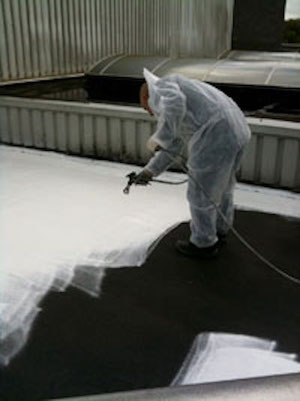 The combination of the reflective properties in the white coating and the thermal protection reduce the overall heat transfer in commercial buildings, Mascoat says, resulting in lower energy needs and costs.

The company notes that the spray-on product is a water-based formula and is non-toxic.

WeatherBloc-HRC is an update from WeatherBloc-IC, which was designed to be a reflective rooftop coating with some insulating capabilities. The new product is not only improved in protection, but also comes at a reduced price, according to Mascoat.

“Weatherbloc-IC was too expensive for this marketplace,” said Will Conner, director of marketing at Mascoat. “But we have worked to identify materials that lower the cost without sacrificing the insulating abilities of WeatherBloc to give customers a coating that will not only protect their substrate for years, but also reduce energy costs at a cost similar to standard reflective coatings on the market today.”

The company adds that the product also resists weathering and reduces condensation.