During the most recent election cycle, Denver joined San Francisco in enacting strict mandates on the city’s roofs, pushing for more buildings to be outfitted with green roofs in an effort to combat heat island effects.

While some are calling the vote a victory, other officials—who maintain that they support the overall goal of the new rules—were quick to suggest that City Council would soften the regulations.

In the six months that have passed since the ordinance took effect, developers have essentially been at a standstill for large roofing projects, and reports indicate that no green roofs have been constructed in the time frame.

The Denver Green Roof Initiative, or Initiated Ordinance 300, was a grassroots campaign backed by Green Roofs for Healthy Cities (the North American green roof and wall association). In August, the campaign announced that it had gathered the minimum 7,000 signatures needed to get I-300 onto Denver’s ballot. 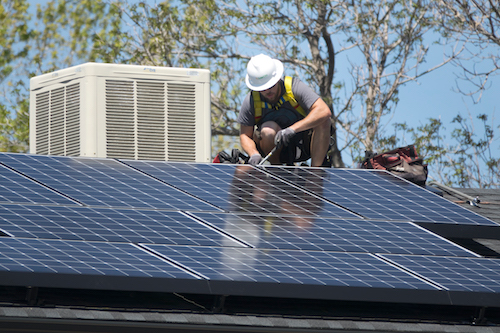 © iStock.com / milehightraveler
I-300 is targeted toward buildings that have at least 25,000 square feet of gross floor space and mandates that builders incorporate green roofing or solar photovoltaics on a portion of the rooftops of new buildings.

“We gathered these signatures solely with volunteers throughout Denver where there is significant public support for implementing green roofs on buildings,” said Brandon Rietheimer, founder of the Denver Green Roof Initiative, through an organization press release at the time.

In October, after it became clear that initiative would be open to voters on election day, the GRHC—along with the Green Infrastructure Foundation—released the findings of a cost-benefit study, which looked at what a “yes” vote in Denver would mean over a 15-year period.

Key takeaways from the study included:

To get those numbers, the study used conservative data on Denver (the city with the third-largest heat island effect in the United States) combined with studies from other cities in North America that have implemented green roof requirements and regulations, such as Portland, Seattle, Chicago, Toronto, Milwaukee, New York City and Washington, D.C.

“Even with the conservative assumptions, we found a strong business case for the ballot initiative, which could be truly transformational for the citizens of Denver in terms of jobs and quality of life,” said Steven W. Peck, founder and president of Green Roofs for Healthy Cities and an author of the study.

WHAT DOES THE MANDATE SAY?

I-300 passed with 54.29 percent of the vote on Nov. 7, and not only requires new, large buildings to be constructed with green roofs, but also requires buildings of a certain size to install a green roof when the current one is up for replacement.

The mandate is targeted toward buildings that have at least 25,000 square feet of gross floor space and mandates that builders incorporate green roofing or solar photovoltaics on a portion of the rooftops of new buildings. The rooftop requirements increase 10 percent for every 50,000 square feet and are capped at 60 percent dedicated coverage for buildings of 200,000 square feet or more.

The same is required for existing buildings when the roofs need replaced or when an addition puts a building over that size threshold.

The replacement-roofs part of the ordinance threw some government officials, as it was seen as an undue burden on business owners. However, the campaign noted after the win that it’s understood, for some buildings—even if they fall into the category that would meets mandate criteria—adding a green roof might not be financially or structurally possible. Owners of those buildings (as well as buildings that might make a positive green impact in a different way) are able to file for an exemption.

Exemption criteria for replacing existing roofs with a green roof include:

However, there has been some debate over whether those exemptions would come with a price tag.

The ordinance states: “If an applicant is unable to provide the green roof coverage as required in this chapter, application may be made to the Denver Planning Board for either a complete exemption to the requirement to provide a green roof or to provide a smaller green roof area than would otherwise be required, provided that a cash-in-lieu payment is made in accordance with this chapter, and the Denver Planning Board shall approve such application and shall notify the appropriate parties of the decision.”

Further, the ordinance defines that price as “based on the average actual cost of construction of a green roof,” which currently equates to $25 per square foot.

It’s the mandate for existing buildings that makes the Denver regulation the strictest that North America has seen. The strictest in the world lies in Singapore, where developers are required to replace the footprint of the building with the equivalent area of living architecture on the roof or facade of the building.

This legislation takes concepts from Toronto and San Francisco, which both have incentives for existing buildings.

“In Toronto, there are incentives in place for green roofs on existing buildings in a voluntary eco-roof program,” Peck said. “The mandatory requirements result in a greater amount of green roof implementation than a voluntary program, and given Denver's urban heat island challenge, this approach should prove more effective at solving this problem than an incentive-based approach.”

While Peck noted that neither San Francisco nor Toronto saw much pushback from developers, the win in Denver drew backlash from several industry groups, including the Associated General Contractors of Colorado.

Denver Mayor Michael Hancock initially opposed the initiative as well, despite assuring Denverites that he agrees with the overall goal.

“While green roofs support many sustainability objectives, Initiative 300 is not the right approach for Denver,” Hancock said in October in a letter to Denver City Council. “By taking a mandate-only approach and eliminating the opportunity for options, the initiative would actually hinder efforts to pilot, promote, phase and incentivize green infrastructure, as is being done in many of our peer cities across the United States.”

But backers of the Green Roof Initiative said that, while it’s true that building costs will go up, factors such as energy savings and roof life balance those costs out. Mandates also, they argued, get more done in a shorter amount of time.

Peck said he recognizes that the costs are challenging for some cities more than others.

“Who's in charge? In cities that are prime markets for future development, it is much easier to pass regulations that provide public benefits through the development process which result in healthier, more livable communities,” Peck said.

“In cities that are struggling to attract more development, there is a greater reluctance politically to require public benefits associated with development, and in some cases, a willingness to use public funds to attract development. In other cities, the development industry is essentially in charge. Developers take risks and need to be rewarded with profits. Regulatory and financial mechanisms that bridge the gap between short-term development interests and the longer-term interests of building owners and the community are needed.”

The new ordinance took effect Jan. 1 (though developers who submitted complete building permits or site plan applications by the end of December were exempt from the changes).

The passing of the legislation also brought with it the requirement of an advisory group on Denver City Council that has been working with the Denver Planning Board to maintain green roof construction standards, among other responsibilities.

At the start of the year, it was announced that City Council had six months to make changes or repeal it entirely with a two-thirds vote. While, at the time, the mayor shot down any chance of repealing it completely, he did say that tweaks were likely.

That time has come, and the task force now has its proposed tweaks lined up. The biggest change comes as no surprise: more lenient requirements. The original ordinance’s mandate of either a green roof or a green roof/solar combination with solar panels on the roof, has now been changed to either a green roof or “green space on the ground or on terraces, a financial contribution for off-site greenery, a green roof/solar combination, renewable energy anywhere on the site, community solar or energy efficiency.” The minimum of a “cool roof,” however, is required on all buildings.

In order for the changes to be adopted by council, the public has to give its input. The task force is encouraging everyone to read the proposal online and submit comments by noon, May 18. The comments will be shared with the task force ahead of its meeting on May 23.

Then, the public comment period will remain open until noon on June 3, at which time the remaining comments will be forwarded on and the task force will evaluate from there.

Even though the mayor had left the door open for changes, Peck said that it’s the collaboration these grassroots campaigns are forcing that will ultimately result in changes for the better.

“Policymakers and utilities combined with market forces need to continue to push the entire industry—from financiers and designers through to construction and maintenance professionals—toward the development of restorative, high performance and tremendously resilient buildings.”