A fatal accident in a Pennsylvania Turnpike tunnel in February was likely caused by the corrosion of steel straps that were holding up electrical conduit, according to a newly released preliminary report from the National Transportation Safety Board. 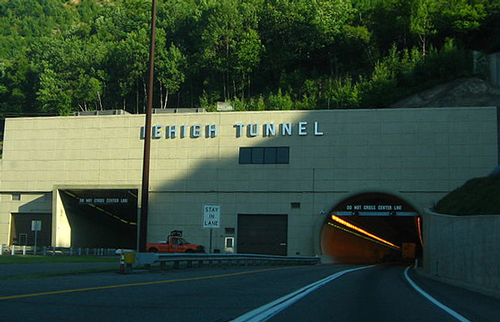 Route 82, CC BY-SA 3.0, via Wikimedia Commons
Corrosion was likely to blame when a metal conduit broke loose of its steel support strap in the Lehigh Tunnel, killing a truck driver, in February.

Truck driver Howard M. Sexton, of East Greenwich, New Jersey, died Feb. 21 in the crash after a length of conduit fell from the ceiling of the Lehigh Tunnel and struck him in the head. Only Sexton’s truck was involved in the accident; no other injuries were reported.

According to the NTSB, Sexton was traveling southbound on I-495—the Northeast Extension of the Pennsylvania Turnpike—around 6 p.m. that day when a 10-foot stretch of metal conduit broke free from its steel support and fell, hitting the windshield of his truck.

The truck continued on through the tunnel for more than half a mile before coming to a rest at the side of the road.

The NTSB accident report explains that a 2016 inspection of the tunnel found corrosion on some of the steel straps keeping the conduit affixed to the tunnel ceiling. The preliminary report does not specify a probable cause, but the summary focuses on the corrosion that had been found on the part that ultimately failed and caused the wreck.

The Pennsylvania Turnpike Commission was already in the process of issuing a contract for the replacement of the lighting and electrical system for the tunnel, a job that will involve moving the conduit from its current location to the sides of the tunnels. That work is expected to be done in the affected tunnel in October.