A chemical leak from a submerged electric transmission line in the Straits of Mackinac last week led to a temporary shutdown of Enbridge’s Line 5 liquids pipeline over concerns that whatever caused the dielectric fluid spill could also have impacted nearby pipes.

A set of underwater transmission cables operated by American Transmission Company, which connect the Upper and Lower Peninsula regions of Michigan, sustained damage April 1; the cause of the damage has not been determined, but the U.S. Coast Guard is reportedly looking into the possibility that a passing vessel was responsible. 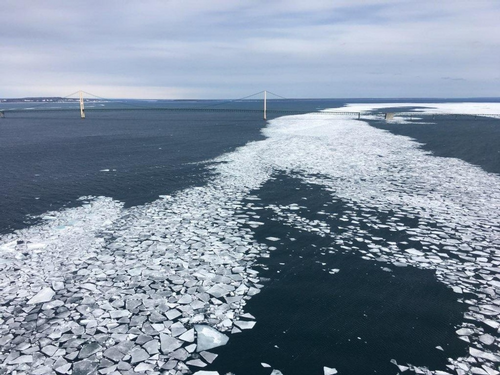 Photos courtesy of U.S. Coast Guard
A set of transmission cables under the Straits of Mackinac, which connect the Upper and Lower Peninsula regions of Michigan, sustained damage April 1.

Insulative dielectric fluid—described by the company as “mineral-based”—spilled into the Straits, totaling about 600 gallons, according to reports. MLive.com identified the product spilled as a fluid made of alkyl derivatives of benzene.

All of the ATC’s cables under the Straits are shut down until further notice, and two that were severed are permanently incapacitated, according to the company.

The Coast Guard took leadership of a group including local and state offices, as well as the utility itself, that responded to the incident and is investigating its cause.

The unified command informed operators of other lines under the water, including a natural gas pipeline and Line 5, of the spill, and Enbridge shut down Line 5 operations Tuesday (April 3) to inspect the line. It was put back into service Wednesday when the company determined there was no visible damage.

There are signs in the area of the underwater transmission line warning passing vessels not to anchor in the vicinity.

The incident has renewed concerns about Line 5, the controversial 65-year-old liquids pipeline that has experienced coating loss in recent years. Some citizens, environmentalists and lawmakers insist the line should be shut down due to the risk for an environmental disaster should a breach occur.

Line 5, which originates in Superior, Wisconsin, where several other Enbridge lines terminate, moves crude oil and natural gas liquids to Sarnia, Ontario, via Michigan. According to Enbridge, while much of the crude coming from Alberta goes to refineries in Sarnia, some is also refined in Michigan and Ohio. And it’s not all Canadian oil moving through the pipeline: At points, sweet crude produced in Michigan is pumped into Line 5 to make its way to refineries as well.

Enbridge has held that the pipeline’s integrity has never been compromised. The line has never had a leak in over six decades of service, and this past summer, it passed a pressure test ordered as part of the company’s consent agreement, established after the 2010 spill on its Line 6B.

An agreement reached late last year between the pipeline operator and Michigan Gov. Rick Snyder will involve a report on alternatives to the pipeline, to prepare for its eventual replacement. The agreement also includes the replacement of the section of Line 5 running under the St. Clair River, which is underway now.