Completed in December, the new terminals are each a work of art in their own right, with the most popular turning out to be the Vaughan Metropolitan Centre Station, the new north-end stop of the Toronto Transit Commission’s Line 1.

London-based Grimshaw Architects, in collaboration with consultants Arup and Adamson Associates, designed a terminal that flaunts a shell-like roof that curves down over the sides of the building. 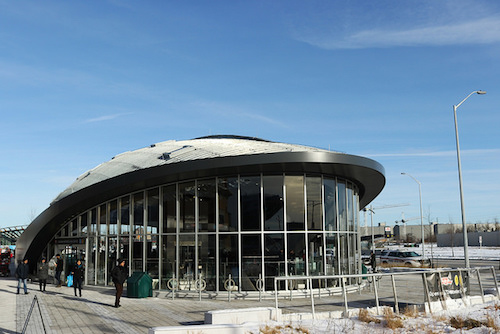 Youngjin Ko, SS-CA-BY 2.0, via Flickr
London-based Grimshaw Architects, in collaboration with consultants Arup and Adamson Associates, designed a terminal that flaunts a shell-like roof that curves down over the sides of the building.

Tall glass windows mark the entrances and the underside of the shell is covered in a metallic ceiling installation—a brain child of Grimshaw and Canadian firm Paul Raff Studio. The curved surface is lined with thousands of mirrored panels that redirect both the natural and artificial light, effectively illuminating the platforms below.

“The station itself introduces natural light deep into the underground concourse through a sweeping domed ceiling that integrates a public artwork by Paul Raff Studio,” Grimshaw notes on its website.

“Its mirrors integrate with the canopy structure to create a three-dimensional collage that reflects skylights and the dynamic activity of the station environment.”

The architects were instructed to blur the line between function and public art for the terminals.

“We’ve found that when you do good urban design, good architecture, the local communities take ownership of the stations,” Ian Trites, supervisor of architectural design for the Spadina line extension, said in an interview with City Lab.

“Kids are less likely to vandalize them, there’s lower maintenance as a result, and people actually enjoy being in the stations,” he said.

The Grimshaw project is one of six new terminal stations that were part of a massive Toronto-York Spadina Subway Extension, totaling about $3.2 billion.

In addition to being the anchor of that project, the city of Vaughan is the center of recent development, which Grimshaw had to keep in mind as it was designing the structure.

"Grimshaw was challenged to imagine a new city around the station and create an iconic head house that would become a focal point and organizing element," the firm said.