Officials at Kentucky’s Fatality Assessment and Control Evaluation Program recently issued a hazard alert in response to what the organization calls an alarming rise in trench work fatalities.

The group—a surveillance program of the Kentucky Department for Public Health and the University of Kentucky, funded by the National Institute for Occupational Safety and Health—expands on data from the Occupational Safety and Health Administration that shows 23 construction workers were killed in 2016 (the latest complete yearly numbers), which is more than the total trench deaths of 2014 and 2015 combined. 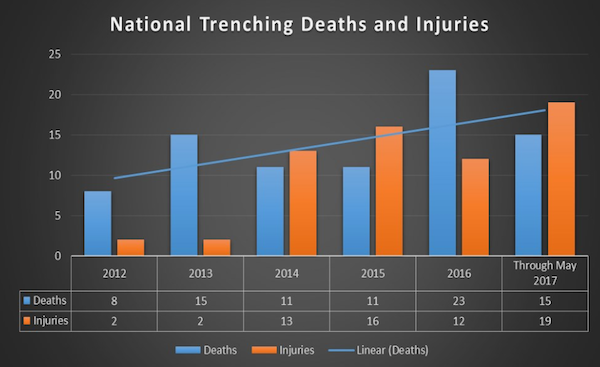 Occupational Safety and Health Administration
Officials at Kentucky’s Fatality Assessment and Control Evaluation Program recently issued a hazard alert in response to what the organization calls an alarming rise in trench work fatalities.

Officials outlined three such deaths that occurred in Kentucky from June 2015 to December 2017:

KFACE went on to detail several tips for protection construction workers who are performing trench work:

Kentucky isn’t the only state cracking down on trench collapses. In January, for the first time in Washington state’s history, prosecutors filed felony charges against a contractor for an employee’s death.

That accident occurred in January 2016, when crews from Alki Construction were working on a sewer repair project at a Seattle site when a trench collapsed just before 11 a.m. Worker Harold Felton was buried in six feet of wet soil, reports said, and when the Seattle Fire Department arrived there were indications that he was alive.

After about 20 minutes at the scene, crews changed from a rescue mission to a recovery mission.

OSHA’s notes on the accident say that the trench “was 21 inches wide by 6 feet long and dug in sandy/loam soil between a sidewalk and the house foundation. There was one hydraulic shore on one side of the trench. There was no shoring at either end.”