President Donald J. Trump announced Thursday that he plans this week to impose tariffs on steel and aluminum imports into the country, drawing praise from American steelmakers but stoking fears of a global trade war among others.

In a listening session alongside U.S. Steel CEO David Burritt, TimkenSteel CEO Ward “Tim” Timken, Nucor Corporation CEO John Ferriola and John Lapides, president of United Aluminum Corporation, Trump announced plans to place 25 percent penalties on steel imports and 10 percent on aluminum imports. He told reporters he plans for the tariffs to be in place for “a long period of time,” which he described at another point as “unlimited.” 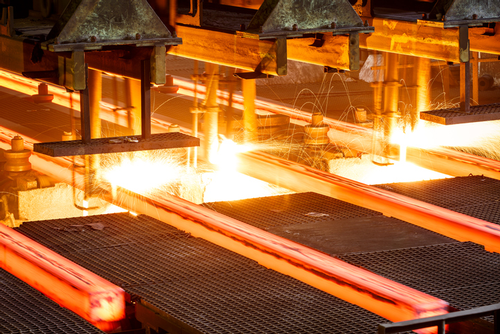 The three business leaders expressed their support of the tariffs, saying that steelmakers and aluminum producers in other countries have “dumped” their product in the U.S. for years, making for an uneven playing field.

Burritt noted that he “has global views and believes in free trade,” but believes the current state of international trade in steel is “completely unfair.” He was quick to note that he does not consider himself to be a protectionist. Lapides said the unfair competition in the aluminum industry was leading to a lack of investment and as a result, a loss of U.S. jobs.

Many international leaders reacted less kindly to the news. European Commission president Jean-Claude Juncker said Friday that the EU would place tariffs on U.S. products like Kentucky bourbon and blue jeans. The International Monetary Fund said through its spokesperson Friday that the planned tariffs were “likely to cause damage not only outside the U.S., but also to the U.S. economy itself.”

The stock market was jarred by the news, with the Dow Jones Industrial Average closing down 400 points on the day Thursday, and dropping further Friday. While traders fear a trade war, Trump tweeted early Friday that “trade wars are good, and easy to win.” Hours later, he added that “IF YOU DON’T HAVE STEEL, YOU DON’T HAVE A COUNTRY!”

The United Steel Workers praised the move, issuing a statement Thursday asserting that the tariffs would help to “restore market-based economics that ensure our domestic producers can achieve a fair return as they invest in facilities, equipment and people.” The USW added that Canada—the source of more steel coming into the U.S. than  any other nation—“is not the problem” and should be exempt from any tariff solution.

Some trade groups, though, have expressed concerns that U.S. producers don’t have the capacity to keep up with demand for steel, and import tariffs will hurt those looking to improve U.S. infrastructure through building projects.

“Potential double-digit tariffs or import restrictions on steel and aluminum could wreck the budgets for numerous infrastructure projects and private nonresidential investments,” said Associated General Contractors chief economist Ken Simonson in a statement. “In addition, any countermeasures taken by U.S. trading partners that are affected by these measures would harm U.S. exporters, transportation and logistics businesses, and ports, which would reduce demand for a variety of construction categories.”