Officials are blaming a leak of acetylene for an explosion that killed five workers in the ballast tank of a ship last week at the Cochin Shipyard in Kerala, India.

The Sagar Bhushan, an offshore drilling ship owned by the Oil and Natural Gas Corporation, was drydocked at the government-owned shipyard when the blast occurred last Tuesday (Feb. 13), according to reports. A preliminary investigation indicates that safety violations at the site and improper oversight may have contributed to the incident. 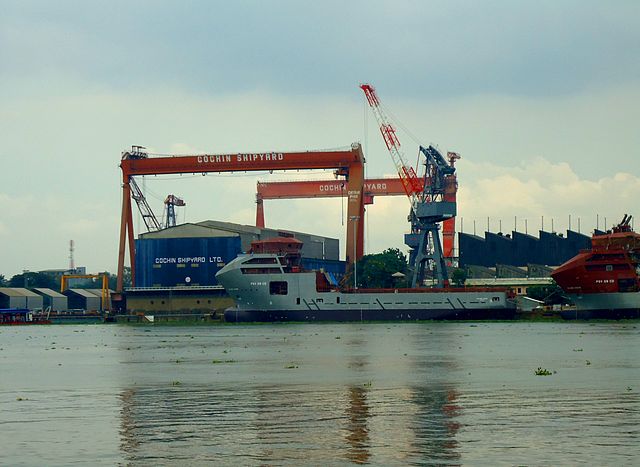 Ranjithsiji, CC BY-SA 3.0, via Wikimedia Commons
An acetylene leak is being blamed for an explosion last week at India's Cochin Shipyard, the country's largest shipyard.

Early reports say acetylene for cutting welding work leaked from hoses and was trapped in the tank, leading to the massive explosion, likely sparked by the hot work being done. In addition to the five workers who died in the incident, 13 more were injured and taken to a local hospital. Four were reported in critical condition.

The initial investigation points to a valve that workers did not close the night before the blast. The Deccan Chronicle reports that a gas fill permit test was conducted the day of the explosion and did not detect the leak, even as a worker complained of the smell of gas.

Local emergency responders also reportedly said they were not notified of the explosion until at least an hour after it took place; rescue and transport operations were carried out by onsite safety officials. Police were notified after the victims had been transported to the hospital, and fire and medical responders reportedly found out about the explosion from the media.

Cochin Shipyard, under the Indian government’s Ministry of Shipping, is the largest shipyard in India. It began operations in 1978, first performing shipbuilding work before adding ship repair in 1982. It performs work on military ships and oil drilling and transport vessels as well as commercial ships.