One of two companies seeking to make the “Hyperloop” high-speed transit system a reality is one step closer, after announcing an agreement with agencies in two states to begin a feasibility study.

Hyperloop Transportation Technologies said last week that it has entered into an agreement with the Illinois Department of Transportation and the Northeast Ohio Areawide Coordinating Agency to study the possibility of a Hyperloop system between Chicago and Cleveland. 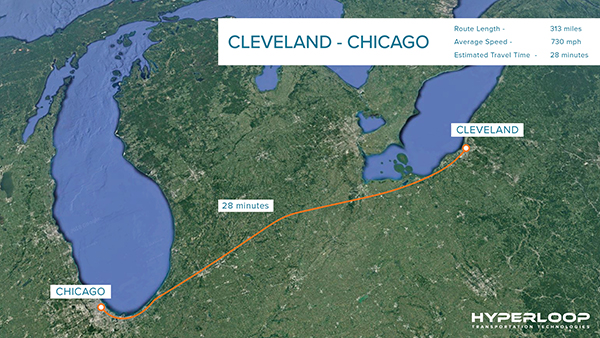 It is the first such agreement involving parties from multiple states.

HTT says it has formed a regional consortium of “other prominent organizations” around the idea of building a Hyperloop system in the Midwest.

"We came here because places like Cleveland, Chicago and Pittsburgh have the manufacturing, the raw materials and the talented, hard-working people in order to make it happen," said Andrea La Mendola, HTT’s chief global operations officer. "We can source everything from this area. This is a place where you make big things."

HTT also noted that last month it worked with Congressional representatives from Illinois and Ohio, as well as Pennsylvania and Wisconsin, to ask President Donald J. Trump for federal support for Hyperloop development.

The Hyperloop concept originated with inventor Elon Musk, who then made the basic plan “open source,” a practice borrowed from the software world, in which a plan or set of code is opened up to the public for further development. That opened the door to HTT and its prime competitor, Hyperloop One, to begin work on bringing the idea to life.

The transportation system makes use of a depressurized cylinder made up of a series of steel tubes through which levitating cylindrical passenger (or freight) pods travel at high speeds on a cushion of air.

The first Hyperloop pod to be built, by HTT competitor Virgin Hyperloop One (previously known simply as Hyperloop One), was unveiled last summer.  That company is studying the feasibility of a Hyperloop route in Missouri, between St. Louis and Kansas City.

HTT began work on its pod last year and anticipates unveiling a prototype this year. HTT’s pod will reportedly be constructed of a carbon fiber composite material called “Vibranium”—inspired by the fictional material used to protect Captain America—that the company developed with Slovakian materials firm c2i, which focuses on engineering carbon fiber structures for next-generation cars and aircraft.