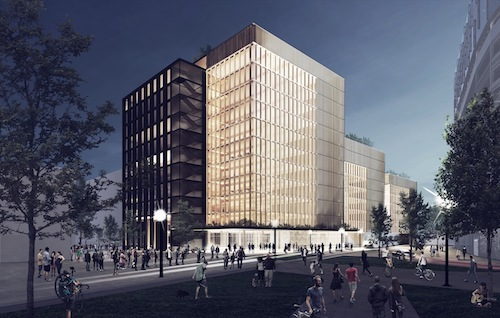 Images: Lotus Equity Group and Michael Green Architecture
Riverfront Square, as it’s being called, will include up to 2,000 residential units, retail shops, cultural and public open space, a hotel, a total of 2 million square feet of office space and parking.

The project, located in Newark, New Jersey, at the site of the former Riverfront Stadium, will be 11.8 acres of mixed-use buildings. The 11-story anchor office is slated to contain up to 500,000 square feet of Class A office space.

Riverfront Square, as it’s being called, will include up to 2,000 residential units, retail shops, cultural and public open space, a hotel, a total of 2 million square feet of office space and parking.

“To build the nation’s largest timber building in Newark speaks to the confidence and belief we have in the city and Riverfront Square as a world-class location that can compete with any great city around the world,” said Ben Korman, Chief Executive Officer and Founder of Lotus Equity Group.

“The vision we share with Michael Green is to design the most environmentally sustainable office tower that enhances the health of tenants and the surrounding communities through efficient planning and green design. When you merge these benefits with Newark’s emerging technology sector, Riverfront Square is primed to help companies attract and retain valuable talent.”

The firms said that they went with the mass timber design because of the sustainability that timber presents, noting, however, that the foundation will be concrete.

The renderings show the structure rising like steps in three different sections of six, eight and 11 stories. The facade cladding materials have yet to be determined, but could include metal panels, brick or wood.

“This project represents an opportunity for MGA, in collaboration with Lotus Equity Group, to lay the foundation for the future of Riverfront Square and the city of Newark more broadly. Good buildings are good neighbors and we envision a sustainable, efficient and architecturally stunning future for Newark,” said Michael Green, Founder and Principal of Michael Green Architecture.

Though mass timber is the plan, Newark’s building code actually limits heavy timber construction to six stories, according to a report by the Wall Street Journal. A spokesperson from Lotus cites local code exemptions made in other states, however, and expects New Jersey to be open to similar exemptions.

The developer also still needs to find a tenant before construction can begin, however, which is expected to take about 20 months.

Along with MGA (which designed the nation’s current largest mass-timber building in Minneapolis) other firms slated for the project include TEN Arquitectos, Practice for Architecture and Urbanism, Minno & Wasko Architects and Planners and James Corner Field Operations.