An architecture firm in South Africa has created what it calls “the ultimate man cave.”

The project (completed in 2016) incorporates a fully functioning skate bowl in the second floor of a residential home in Cape Town, a feat that took a bit longer than Inhouse Brand Architects expected. 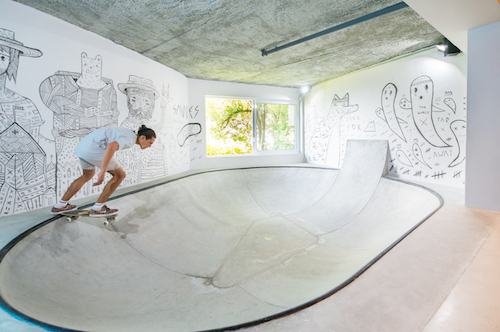 Inhouse Brand Architects
An architecture firm in South Africa has created what it calls “the ultimate man cave.”

Led by creative director Aidan Hart and the firm’s senior designer Jenine Bruce, the bowl was originally supposed to be built in a stepped-down recess, but the team quickly realized the framework would not support it.

So, they removed the entire floor level.

During a six-week process, “timber fins were crafted in the newfound space to create the frame; flexible plywood and polystyrene were incorporated to shape the backing; sand and rubble were used to fill the level that was taken out; and finally, cement was poured into the structure to solidify the bowl shape,” the firm writes on its website.

Polished concrete flooring runs throughout the space, and facing the bowl on the opposite wall is a “wave” that cascades down from the ceiling. The feature was created out of steel fins clad with timber and LED strips.