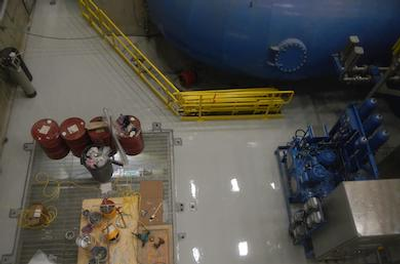 Courtesy of Brian O'Farrell
As part of one session, Brian O'Farrell described a job in which crews coated a concrete floor at a new-build hydroelectric station in northern Canada, a job that won a D+D Elevation Award last year.

Randy Nixon, of Corrosion Probe, discussed the idea of 28 days as the “magic number” for curing concrete before coating. The 28-day figure, Nixon explained, was developed as something of a rule of thumb: Exactly four weeks is a round number, and was an easy way to approximate the period of 26-31 days that most standard concrete mixes need to gain compressive strength before coating.

The actual number, though, can vary widely, Nixon explained, based on a slew of factors. The two biggest concerns are shrinkage—which can cause cracks—and excess water.

Factors including water-to-cement ratio in the mix, paste-to-aggregate ratio, environmental factors and cure temperature can all affect the time needed before concrete can be coated, Nixon said; the first two factors have the greatest impact.

Nixon concluded that more work must be done to better understand when a given batch of concrete will be ready to coat, based on the factors that are known to affect shrinkage. (More water content in the mix, for example, can cause more shrinkage; instead of adding “water of convenience” to make the cement more workable, a plasticizer can be added, changing the consistency of the mix without adding unnecessary water.)

Chris Hamilton of Avanti International, in his talk, discussed what causes cracking in concrete structures and what coating and grout products are available to repair cracks in different situations.

Hamilton described cracks from shrinkage during curing, movement cracks from the freeze-thaw cycle or geological factors, spalling brought on by rebar corrosion and cracking from external forces (such as a car hitting a concrete wall).

Hamilton noted that epoxy repair products exhibit high strength and are best for structural repairs, but aren’t particularly effective in a waterproofing capacity. Hydraulic cements, or patch mortars, have decent strength and can plug low flows of water.  Injection grouts, on the other hand—generally urethane or acrylic—while low in strength, can stop very high flows and exhibit high longevity.

As part of the same session, Brian O'Farrell, of DP Coatings Ltd., described a recent concrete floor-coating job he was part of at a remote new-build hydroelectric plant in northern Canada. O'Farrell described the unique challenges faced in the context of a power-generating plant, and an industrial floor job in general, where time is of the essence. O'Farrell described how the parties worked together to overcome water-intrusion issues and other challenges to successfully complete the job in six days.

The hydroelectric plant job was the winner of one of Durability + Design's inaugural Elevation Awards this past year.