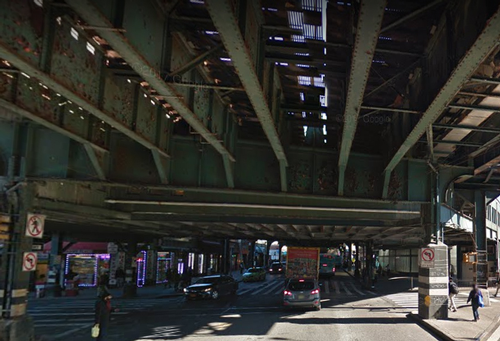 © 2017 Google
The legislation was spurred by a complaint from the International Union of Painters and Allied Trades District Council 9, which in April analyzed paint chips that had fallen from an elevated station on the 7 train line in Jackson Heights, Queens.

The new law, introduced in April by state Sen. Jose Peralta, D-Queens, directs the two agencies, which oversee public transit in New York City and beyond, to “study and report on the aboveground transit infrastructure of the metropolitan transit authority.” It passed the Senate unanimously over the summer, was delivered to the governor’s desk earlier this month and was signed Monday (Dec. 18).

The legislation was spurred by a complaint from the International Union of Painters and Allied Trades District Council 9, which in April analyzed paint chips that had fallen from an elevated station on the 7 train line in Jackson Heights, Queens. The union reported that the paint debris had lead content of 244,000 parts per million, about 48 times the limit that would require abatement according to federal law.

According to the law, the MTA and NYCTA will work with the state Department of Environmental Conservation and Department of Health to study the lead content of paint on aboveground stations in the city, look at abatement that has been done during station renovations in the past, and determine if the agencies have been in compliance with state and federal laws regarding lead abatement.

The study, according to the law, should include testing in all five boroughs, and should comprise a representative sample of transit stations throughout the city, including low-income neighborhoods.

The agencies are to publish a report on the matter, addressed to the governor, both houses of the legislature and the mayor of New York City by March 1. The law does not include requirements beyond the study itself.

The 7 train, which stretches from Flushing, Queens, to Chelsea, Manhattan, opened 100 years ago.

As part of a year-end flurry of new legislation, Cuomo also signed into law the “Buy American” rule that had passed the state Senate and Assembly earlier this year. The law requires all bridge and road projects in the state to use structural iron and steel made “in whole or substantial part in the United States,” with some possible exemptions.

The Buy American law goes into effect April 1 and will apply to contracts issued by the Department of Transportation, Thruway Authority, Bridge Authority, MTA, Office of General Services, SUNY Construction Fund and Dormitory Authority after that date.

And Cuomo and New Jersey Gov. Chris Christie jointly announced last week that they were committing their states’ portions of the funding needed for the $12.7 billion Gateway Hudson Tunnel Project, expanding rail access under the Hudson River. Funds will come from sources including NJ Transit ($1.9 billion), the State of New York ($1.75 billion) and the Port Authority of New York and New Jersey ($1.9 billion).