The city of Los Angeles recently began issuing notices to those who own older concrete structures, as well as wood-framed buildings, informing them of their seismic retrofitting requirements regarding a recently adopted ordinance.

The Los Angeles Department of Building and Safety has begun sending compliance orders to property owners, with around 13,500 properties in the city in need of retrofitting. The good news, however, is that there is financial assistance available.

According to ENR California, these compliance orders are the first wave from a law passed by the city two years ago, one that requires seismic retrofits of older, nonductile concrete buildings, as well as weak first-story wood-framed buildings.

The nonductile concrete section of the ordinance applies to around 1,200 buildings, and gives property owners 25 years to retrofit or raze. According to Luke Zamperini, chief inspector and public information officer for the Los Angeles buildings department, the majority of the structures have already been identified. 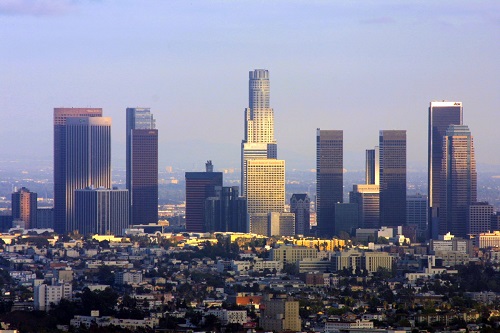 Thomas Pintaric, CC BY-SA 3.0, via Wikimedia Commons
The city of Los Angeles, known for being a hotbed of earthquake activity, has issued notice to those who own older concrete structures, as well as wood-framed buildings; these buildings will require seismic retrofitting.

Known as the “Mandatory Earthquake Hazard Reduction in Existing Non-Ductile Concrete Buildings,” the ordinance applies to concrete buildings (not including freestanding one- and two-story family houses) that had a permit application before Jan. 13, 1977. The buildings department will identify the age of those structures that lack a permit.

The retrofit list is based on information released by the University of California, Berkeley, and the Los Angeles County Assessors’ Office, noted ENR California.

In light of the cost associated with the retrofitting ordinance, a number of property owners have taken to selling the buildings rather than choosing to retrofit or raze. But for those choosing to have the retrofitting work done, however, clean energy financer Ygrene Energy Fund will be providing Property Assessed Clean Energy financing.

“For Californians looking to protect against seismic damage, these retrofits are not a matter of luxury, but necessity,” said David Kelly, Ygrene’s National Sales Director.

According to Ygrene, retrofitting can cost upward of $100,000 on multifamily buildings.

Structural engineer Dilip Khatri, who specializes in quake-resistant buildings in and around Lose Angeles, has advised property owners to begin the retrofitting process as soon as possible, emphasizing that the cost will climb because of the demand for services.

“It makes sense to get your project done sooner rather than later,” Khatri said. “Capital is also a big issue for small investors with limited liquidity. Rent control certainly does not help. Property owners will be looking at either ‘weathering’ this storm or selling their investments. It’s a plain fact of reality because [retrofits] are mandatory, so you have to evaluate your options.”

Property owners who use PACE financing can make payments with property taxes, and the loans can be repaid over 20-plus-year terms.