Keeping roads and highways safe and reliable and addressing fraud on the part of contractors should be two top priorities for the U.S. Department of Transportation in 2018, according to an annual report issued recently by the DOT’s internal watchdog. 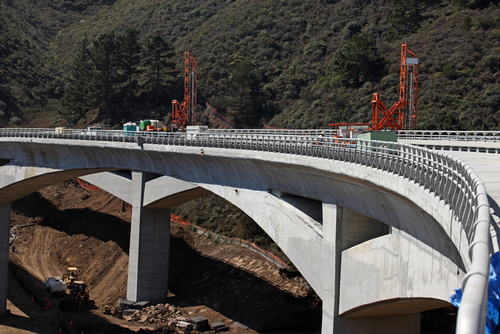 © iStock.com / DanCardiff
The Department of Transportation is relying increasingly on public-private partnerships, the Office of the Inspector General notes, and it must ensure that private partners are meeting federal guidelines on these projects.

The DOT Office of the Inspector General released its report, DOT’s Fiscal Year 2018 Top Management Challenges, on Nov. 15, pointing to a number of issues that agency management should stress this year. Fraud, waste and abuse, in the form of actions like suspensions and debarments, as well as Disadvantaged Business Enterprise fraud, are also challenges the OIG sees for the DOT.

The OIG is the body responsible for taking action when fraud or other criminal acts may have been committed by contractors working on federal projects, but the office says in the report that other DOT agencies don’t always report wrongdoing appropriately. The OIG is performing an audit to determine whether agencies within the DOT have proper policies for referring potential criminal cases to the office and the Department of Justice.

The OIG also suggests that DOT agencies might be able to strengthen the suspension and debarment process, which the department uses to prevent contractors who have engaged in wrongdoing from securing more federal contracts. The suspension and debarment process often takes far too long, the OIG says in its report, and it is often started when OIG confirms wrongdoing by a contractor, but not when other agencies or the media report breaches of ethics.

Additionally, the OIG recommends stronger action to combat Disadvantaged Business Enterprise Fraud—the misrepresentation of a contractor as being owned by a member of a protected minority group for the purposes of acquiring contracts or special funding, or the use of pass-through DBE businesses to qualify for credits. DBE fraud accounts for more than 30 percent of all fraud investigations open right now, the OIG says.

The report notes that the DOT is looking toward “new and innovative funding sources” for infrastructure projects, chiefly public-private partnerships. The OIG notes that the increasingly popular P3 model comes with some challenges, like ensuring the private partner’s compliance with federal guidelines.

The OIG also singles out the Federal Transit Administration for its issues mitigating financial risks on big projects receiving federal funding. The FTA also in some cases failed to catch grantees charging incorrect rates in some cases.

The OIG notes in its report that the Federal Highway Administration is two years behind in implementing requirements related to bridge safety that were mandated by the Moving Ahead for Progress in the 21st Century Act. The report says nearly a quarter of the 600,000 bridges in the U.S. are structurally deficient, but the FHWA has failed to keep up with plans to address the problem.

Included in the list of actions the FHWA should be taking, according to the OIG, is the full implementation of a nationwide bridge safety risk-management process.

The OIG says the Pipeline and Hazardous Materials Safety Administration, which oversees oil and gas pipelines and responds to incidents in the industry, “lacks sufficient processes, oversight and project management skills to address its mandates and internal deadlines in a timely manner.”

The agency has made progress by implementing programs like a rulemaking prioritization process, the OIG says, but it’s too early to tell whether its actions have resulted in serious strides toward efficiency and effectiveness.