Technology Publishing Company’s inaugural Contractor Connect event began with a bang Wednesday (Nov. 8), with participants enjoying everything from discussing industry information to a little friendly competition on the links. Presented by PaintSquare and Paint BidTracker, the three-day event at the Grand Hotel Marriott in Point Clear, Alabama, brought contractors and materials suppliers in the industrial and protective coatings industry together

Contractor Connect officially kicked off Tuesday evening (Nov. 7), as guests arrived for a welcome dinner and cocktail reception in the Grand Hotel’s Sky Room, followed by a bonfire on one the property’s beaches overlooking Mobile Bay.

Next, attendees were given the option to partake in one of two planned social events on Wednesday morning (Nov. 8). A Ryder Cup-style golf tournament, sponsored by BrandSafway, pitted contractors against suppliers on the Lakewood Golf Club’s Magnolia course, one of the stops on the famed Robert Trent Jones Golf Trail. 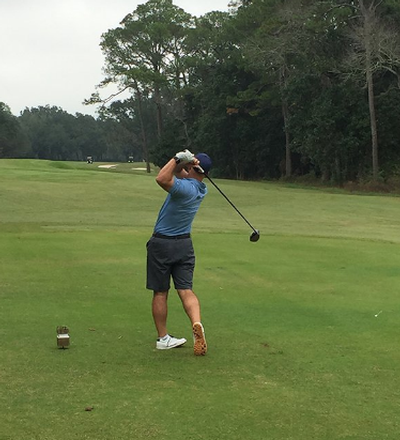 The team of contractors defeated the suppliers’ team, 77 to 67, and some side prizes were awarded to contest winners during the tournament. Darrell Domokos of BrandSafway and Todd Gomez of Chemline won closest-to-the-pin contests on selected holes, while Natalie McGraw, spouse of Dane McGraw of Thomas Industrial, won the straightest drive competition.

Non-golfers were transported to Orange Beach, Alabama, where two boats were chartered for a day-long bottom-fishing trip on the Gulf of Mexico. Attendees were split between two 60-foot fishing boats—the Annie Girl and Summer Breeze—and, again, engaged in some friendly competition as the two boats battled to see which could catch the largest and highest number of fish.

After returning, the fishers, golfers and the rest of the Contractor Connect crowd gathered again for a beachfront patio dinner, where the various prizes were awarded and bragging rights for golfing and fishing prowess were debated.

The business side of Contractor Connect got underway Thursday morning (Nov. 9), opening with a panel discussion on advances in coatings technology. J. Peter Ault of Elzly Technology Corporation moderated the discussion amongst a panel of coating industry veterans, including William “Doni” Riddle of The Sherwin-Williams Company, Davies Hood of Induron and Todd Gomez of Chemline, on recent developments in protective coatings formulation and application.

Some of the topics discussed included VOC- and HAPS-free products; high-solids and plural-component coatings; specialized application equipment and techniques; and a general focus on investing in new technology and worker training to ensure that these new coatings are being properly applied. “It’s about working smarter, not necessarily harder,” said Gomez.

The second panel of the morning was moderated by Alison Kaelin of ABKaelin LLC, who led discussion on navigating OSHA’s new beryllium rule. Panelists Dominic DeAngelo of Harsco Minerals, Russell Raad of Abrasives Inc. and Mike Johnston of U.S. Minerals attempted to dispel some of the misconceptions regarding the hazards of beryllium exposure during abrasive blasting operations.

Personal protective equipment, worker education and training and other ancillary provisions of the proposed OSHA rule were discussed, and while some issues brought out some contention between the moderator and panelists, a consensus on the need for more complete information throughout the industry was reached. “We have a lot of educating to do,” Raad commented.

The third and final of Thursday’s panel discussions focused on answering frequently asked questions regarding equipment used throughout the protective coatings industry. Ault played the role of moderator again, this time with panelists Darrell Domokos of BrandSafway, Clay Miller of CLEMCO Industries, Bob Nash of Greener Blast Technologies, Nate Wayne of Industrial Vacuum Corp., and Chris Keenan of Marine Equipment Supply (MES). Items up for discussion included recent technological advances on the market, safety considerations, preventive maintenance tips and an overall discussion on how equipment has evolved with the rest of the industry. As Keenan put it, “If you take care of your equipment, it takes care of you.”

A Q&A session with the panelists followed each panel discussion so that attendees could pose questions and walk away with a better, more complete understanding of the topics at hand, as well as a handful of contacts for further information if needed down the road.

Contractor Connect wraps up today with final one-on-one meetings between contractors and suppliers.