A new report issued by the United States’ Congressional watchdog agency asserts that the Navy’s shipyards are “in poor condition” and are not meeting the military branch’s operational needs—a problem that won’t get better without considerable investment.

The Government Accountability Office, a nonpartisan body operating under the legislative branch, published the report, titled “Actions Needed to Improve Poor Conditions that Affect Operations,” earlier this fall. The main point: The Navy’s four shipyards (Norfolk, Portsmouth, Puget Sound and Pearl Harbor) are in poor physical condition, and the backlog created as a result comes at a cost of $4.86 billion. 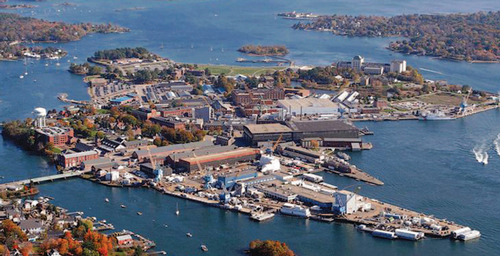 The average age of Navy shipyard equipment is beyond the equipment’s useful life, the GAO reports, citing a Navy analysis. Less than half of aircraft carrier maintenance jobs between 2000 and 2016 were completed on schedule, the report notes, and less than 25 percent of submarine maintenance projects came in on deadline. The 19-year backlog of work at the facilities is 40 percent longer than it was just five years ago.

According to the report, Navy shipyards include 1.2 million square feet of space that is either condemned or unusable, in some cases prime waterfront property that is going unused. Problems with the layout of some of the shipyard facilities result in operational inefficiencies.

The average age of Navy drydocks is 89 years, the GAO says in the report, with the newest drydock having been built 55 years ago. Aging drydocks are at risk for obsolescence, deterioration, flooding and seismic vulnerabilities, the agency notes. (Puget Sound Shipyard in particular is located in an area of seismic risk.)

Some drydocks at several of the Navy’s facilities require buoyancy assistance in order to move submarines into the drydock; one at Puget Sound, the GAO says, can only move Los Angeles-class subs “after they have had several tons of weight removed and only during a high tide.”

The report breaks down information about each of the four shipyards owned by the Navy.

Norfolk Naval Shipyard, the oldest of the four, has five drydocks and has maintained a “poor” facility condition rating over the past four fiscal years. The shipyard, with more than 10,000 civilian employees, was funded with $1.5 billion last year. Norfolk delivered 45 percent of its projects on time between 2000 and 2016.

Portsmouth Naval Shipyard, in Kittery, Maine, with three drydocks, has also been rated “poor” for the past four years in terms of facility condition. The buoyancy assistance equipment at the shipyard will reach the end of its service life in 2021, the GAO says. With $825 million in funding last year, Portsmouth had about 5,500 civilian employees; its on-time delivery rate was 34 percent over the past 16 years.

Puget Sound Naval Shipyard, in Bremerton, Washington, is the largest of the four, with six drydrocks and a 2016 budget of $1.95 billion. The shipyard delivered just 29 percent of its projects on time over the past 16 years. Its facility condition rating rose from 2013 to 2014, and has since remained in the upper 70s, in the “poor” category but very close to “fair.”

Only 14 percent of projects at Pearl Harbor Naval Shipyard were delivered on time between 2000 and 2016, with 40 percent delivered 70 or more days late. The Hawaiian facility had a “fair” rating in 2013 but has since slipped to “poor.” Pearl Harbor has four drydocks and employed more than 5,000 civilians last year, with a budget of $838 million. The GAO notes that Pearl Harbor faces special challenges related to historic preservation, as 8 percent of the shipyard’s facility is designated as a historic landmark.

The GAO says in its report that while the Navy has detailed investment plans for its facilities, its plans are often missing important elements that would make them more effective in addressing facility problems.

The report calls for long-terms goals to help guide capital investment planning. Current Navy plans do not identify goals that will succeed in improving the shipyard facilities, according to the GAO. The metrics the Navy uses to measure performance are specifically tied to ship maintenance, the report says, but don’t measure the affects of facility condition on overall performance.

The Navy is looking to ramp up production of new vessels after Navy officials and President Donald J. Trump called for an expansion to the fleet, to 350 or more ships. Last December, in the Navy’s Force Structure Assessment report, then-Secretary of the Navy Ray Mabus called for plans to expand the fleet to 355 ships.

The Navy’s new ships are built by contractors, chiefly Newport News Shipbuilding, a division of Huntington Ingalls Industries, which is the Navy’s sole designer and builder of aircraft carriers. General Dynamics Electric Boat is the primary supplier of submarines.