Engineers in the Netherlands say they’ve completed the world’s first 3-D-printed reinforced concrete bridge, a span for cyclists that’s now open in the town of Gemert.

Created at Eindhoven University of Technology, the bridge—26 feet long and about 11 feet wide—was tested with a load of five tons, far more loading than it will be subject to day-to-day handing bicycle traffic. The breakthrough creation, the university says, has provided engineers a chance to better understand the concrete 3-D printing process, and will help them to build larger spans in the future. 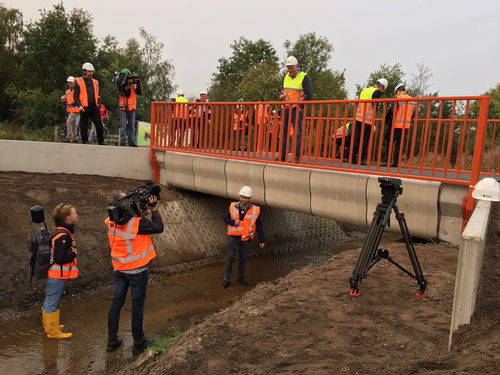 The Gemert project is part of a larger road project undertaken by contractor BAM Infra. EUT professor Theo Salet, whose specialty is concrete construction, headed up the printing operation. The EUT team created a 1:2 scale prototype in the spring, then commenced 3-D printing of the real thing in June.

While 3-D printed structures—created by machines that deposit layers of material such as concrete—have grown in popularity in recent years, one breakthrough of the Dutch bridge project is the insertion of steel reinforcing cables, important in concrete load-bearing structures, during the printing process.

The engineers say the deposition process has the potential to speed the bridge-building process up, possibly by as much as threefold. Larger bridges could be built by assembling smaller parts created by printers.

In addition to BAM and EUT, other entities involved in the project included: engineering firm Witteveen + Bos, the municipality of Gemert-Bakel and the province of Noord-Brabant.