The Sherwin-Williams Company (Cleveland) released its third-quarter earnings on Tuesday (Oct. 24), reporting a continued increase in net sales and record numbers credited to the company’s acquisition of Valspar earlier this year. 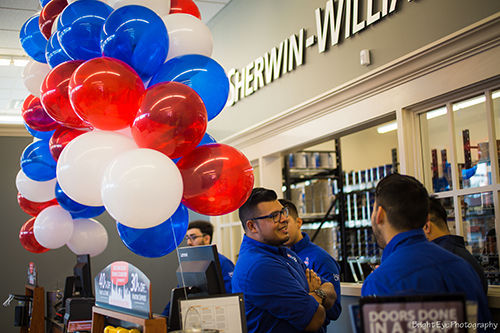 Earnings Before Interest Taxes Depreciation and Amortization from continuing operations increased 9.6 percent in nine months to $1.7 billion and, the company noted, it increased 4.3 percent without the impact from the Valspar acquisition.

“The string of natural disasters impacting Texas, Florida, the Caribbean and Mexico in recent months was unprecedented, and so was the response of the Sherwin-Williams team members in those communities,” said John G. Morikis, Chairman, President and Chief Executive Officer. “Our associates committed countless hours of work toward disaster relief, clean up and customer assistance. Thanks to their efforts, the impact of these events on our business was at the low end of the expectations we communicated on Sept. 28.

“The sales momentum we saw across most of our businesses leading up to the storms was encouraging. Comparable store sales growth in our North American paint stores was running in the high single digits, and the Consumer Brands Group and the Performance Coatings Group were both showing sequential improvement. Unfortunately, the natural disasters disproportionately affected profitability in the quarter as lost sales and gross profit could not be offset by reduced operating expenses.”

Architectural paint sales propped up the Americas Group, which saw net sales increase 6.5 percent to $2.54 billion and a segment profit increase by $6.3 million to $525.6 million. Latin America region net sales, stated in U.S. dollars, increased 4.9 percent in the quarter and net sales from stores in U.S. and Canada open for more than 12 calendar months increased 5.2 percent in the quarter. The increases in the segment are attributed to higher paint sales volume and selling price increases.

The Performance Coatings Group led the numbers with a 150.8 percent increase to $1.24 billion in the quarter again attributed to Valspar sales, higher paint sales volumes and selling price increases. Acquisition costs also impacted this segment profit, which decreased in the quarter to $59.6 million from $68 million.

“As we indicated at our Financial Community Presentation on Oct. 3, the Valspar integration plans and synergy progress is in line with our expectations,” Morikis said. “We remain focused on strengthening the performance of our core businesses and our newly acquired businesses.

“We have implemented appropriate pricing initiatives to offset increasing raw material costs, and continue to focus on volume improvements in all businesses and all regions. Our success in driving improvements in our operating results and implementing integration plans will create a highly differentiated enterprise better equipped to serve paint and coatings customers around the corner and across the globe.”

Looking to the fourth quarter, Morikis said the company anticipates that core net sales will increase a mid-to-high single-digit percentage.