The largest renovation project that Seattle’s Space Needle has ever seen got started last month, and crews recently hit the crucial milestone of hoisting up some pretty unique scaffolding in order to work on the structure’s iconic observation deck.

Working at night, a crew of 25 people raised a 28,000-pound platform 400 feet into the air to the Space Needle’s SkyLine. A dozen operators were on top of the donut-shaped platform as it rose in the air, which is now chained in place.

The platform that crews from Hoffman Construction used was from Safway—the Quick Deck is typically used in the bridge and industrial markets.

The Century Project (the name of the Space Needle’s renovation) markets one of the largest lifts for a Safway Scaffold, according to the Needle. After the scaffolding was hoisted and secured and fully built, crews took another two weeks to enclose it, allowing them to remain in operation throughout Seattle’s weather patterns, including the replacement of the observation deck piece by piece.

"Getting the elevated platform in place was our first big move. This hasn't been done before. Our construction partners had to use a great deal of ingenuity and creativity to develop this plan. That plan—and great weather—allowed us to have a successful platform raising, which will allow us to remain open during construction."

Prior to construction, CEO of Space Needle LLC, Ron Sevart, told the Seattle Times that the observation deck-cage, window supports, interior walls and thick doors “prevent” great views of Seattle. All of these will be replaced with glass panels and floor-to-ceiling windows.

“It’s about getting out of the way of the view,” Sevart said. The new panels for the observation deck will be tilted outward to prevent glare, while alternate sections of glass will be fitted with glass benches. 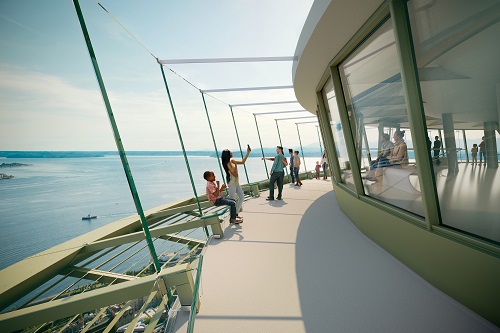 Space Needle LLC
Prior to construction, CEO of Space Needle LLC, Ron Sevart, told the Seattle Times that the observation deck-cage, window supports, interior walls and thick doors “prevent” great views of Seattle. All of these will be replaced with glass panels and floor-to-ceiling windows.

An open circular stairway will lead from the observation deck to the restaurant below. To match the ongoing theme of the renovation, the staircase will be made of steel, wood and glass, and at the base of the staircase, a glass-floored oculus will reveal the Needle’s steel superstructure.

Down in the restaurant, work has also already begun. The famous rotating floor will also be replaced with glass, which, according to the company, will make it the first glass-floored restaurant in the world. The restaurant is closed and is slated to reopen in May 2018 while renovations are being completed.

Other renovations for the Needle include wider stairs, double doors and a custom-designed ADA lift.

This is the third renovation of the structure, and the most expensive. The Century Project is estimated to total $100 million and is funded privately by the Wright family, who own the structure.

Space Needle LLC is working with design firm Olson Kundig on the exterior, and Tihany Design on the interior of the restaurant. With respect to keeping the Space Age piece intact, local architecture historians and preservationists, as well as the City of Seattle Landmarks Preservation Board, have been consulted.