Some bridges are built to help people get from one side of a river to another, and some are constructed to avoid the need for an intersection between two busy roads. Then there’s the California Department of Transportation’s proposed Liberty Canyon Bridge: It’s designed to help mountain lions breed.

OK, it’s not just to help mountain lions breed—but promoting genetic diversity among big species is one major goal of the proposed overpass, which would reconnect the Santa Monica Mountains with the Sierra Madre across U.S. Route 101. Biologists have found that over the years, populations of big cats and other animals have become isolated on one side or the other of the highway, leading to a shrinking gene pool. 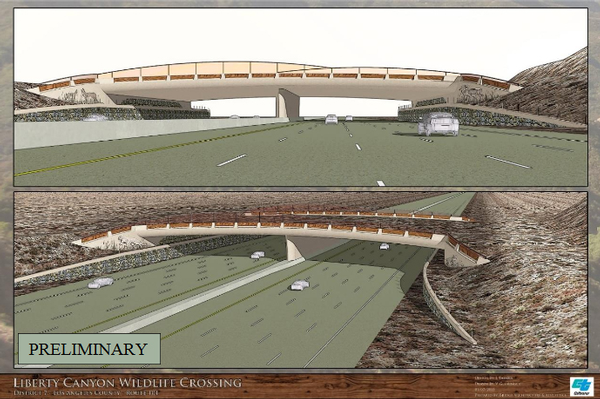 Other issues include the obvious: Many animals are injured or killed trying to cross the highway between the two wild areas, and drivers are at risk, too, when they swerve to avoid a crossing creature.

Enter Caltrans and its wildlife bridge: The project, officially known as the Liberty Canyon Wildlife Habitat Connectivity Project, involves plans to construct an overpass over 101 in the area of the City of Agoura Hills, just south of Simi Valley, outside Los Angeles. Pending approvals and funding, the bridge is set to begin construction in 2022, and it’s moving along according to plan—Caltrans released a draft environmental assessment for the project in mid-September.

The main component of the project is a 200-foot-long, 165-foot-wide crossing over 101, to be covered in soil and vegetation. One alternative design involves the addition of a second, smaller bridge across nearby Agoura Road, which parallels the highway.

Both alternatives involve the construction of retaining walls, soundwalls and fencing to help keep the  animals on the right track.

The Liberty Canyon project has been in the works for years—the first renderings of the bridge were unveiled in 2015, and according to Caltrans, scientists have been raising concerns about the highway’s effect on wildlife since at least 2002.

Other similar wildlife crossings have been planned or constructed elsewhere—like Galway, Ireland’s bat bridge, built over a newly constructed highway this year. But Caltrans says Liberty Canyon would be the first of its kind in that state.

The Mountains Recreational and Conservation Authority and the Santa Monica Mountains Conservancy bought the land the bridge will be built on last year for about $7 million. Construction will reportedly cost about $25 million; funds are still being raised for the project.