The saying, “Everything’s bigger in Texas” will ring true once again with the construction of the Texas Rangers new home, Globe Life Field.

The retractable roof, which was reportedly one of the main reasons for the proposition of a new venue in the first place, will reportedly be one of the largest roofs in the country, according to Bryan Trubey, executive vice president and director of sports and entertainment for Dallas-based HKS Inc., the architect overseeing the design of the new ballpark. 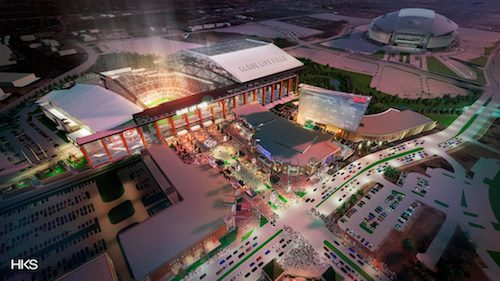 HKS Inc.
The retractable roof of Globe Life Field will reportedly be one of the largest roofs in the country, according to Bryan Trubey, executive vice president and director of sports and entertainment for Dallas-based HKS Inc., the architect overseeing the design of the new ballpark.

The new facility itself will also be larger than the team’s current park, though it will hold about 9,000 less fans.

"The scale will be significantly larger than Globe Life Park, but still pays reverence to many of the long-term fans," Trubey said. "This will be a significant investment, but it is being done in the correct way to see the long-term value for this type of venue."

The $1.1-billion, 13-acre, 1.7-million-square-foot ballpark is scheduled to break ground on Thursday (Sept. 28), with excavation taking place in October.

Trubey said at a press conference last week that the goal was to come up with a design that the next wave of ballparks would take as an influence.

"We wanted to create an open-air ballpark with a roof on it, which was one of our biggest challenges," Trubey said. "We really wanted to create the first next generation ballpark. We didn't want to design another incremental ballpark, but make an epic and game-changing improvement."

Officials also indicated that they will be using materials an architecture that’s unique to Texas, such as in-state limestone and brick and the use of the different arches seen in the new design.

Trubey also pointed out one last detail that aims for both uniqueness and functionality: The retractable roof (with a 12-minute operation time) will close over the infield first, which would, in theory, allow for the most important part of the field to be protected quickly should there be a sudden change in the weather (downpour).

Many such roofs that already exist, Trubey noted, close over the outfield first.

The facility is expected to be open for the 2020 season, and the Texas Live! entertainment complex next door is slated to be open in 2019.