Even as planning continues for the Gordie Howe International Bridge between Detroit and Windsor, Ontario, Canadian officials have reportedly approved a plan for a new privately owned Ambassador Bridge just upriver.

The permit, announced Wednesday (Sept. 6) by Transport Canada, gives conditional approval to the new Ambassador, contingent on a number of factors, the most notable being the demolition of the current Ambassador Bridge. Bridge owner Matty Moroun had previously declined to rule out keeping the old bridge standing for possible use during high-traffic periods. 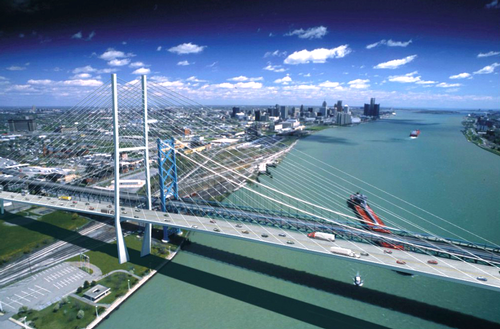 Detroit International Bridge Co.
Canadian officials have given conditional approval to a plan to build a new privately owned Ambassador Bridge between Detroit and Windsor, Ontario.

The old Ambassador, opened in 1929, has been subject to government action in recent years due to reported crumbling concrete and other condition issues. Moroun and his Detroit International Bridge Company (which in Canada is called the Canadian Transit Company) have pursued permissions to build their new bridge while fighting plans for the proposed Gordie Howe International Bridge, which will be a public crossing slightly south of the Ambassador.

The current Ambassador Bridge is the busiest border crossing between the U.S. and Canada in terms of trade volume; according to Transport Canada, more than $120 billion in two-way trade crossed the bridge in 2015. It is currently the only bridge between Detroit and Windsor, which are also linked by a truck ferry, a rail tunnel and a vehicular traffic tunnel.

"The Ambassador Bridge will now build North America’s longest cable-stayed bridge next to the original span of the privately funded Ambassador Bridge, which was the longest suspension bridge when it opened in 1929," Detroit International’s Matthew Moroun, son of Matty Moroun, told the Detroit Free Press in a statement Wednesday.

In addition to removing the old span upon completion of the new bridge, the Ambassador operators are required under the conditional approval to “improve local infrastructure,” create new public green spaces, protect the environment and consider indigenous interests.

That’s not the only hurdle the new Ambassador needs to clear: Michigan Gov. Rick Snyder noted in a statement Wednesday that the project still needs to acquire a number of U.S. permits.

“Today’s announcement reflects that reality and also addresses the physical limitations of the 87-year-old Ambassador Bridge by calling for a replacement span, rather than the construction of a ‘twin’ span,” Snyder said. “However, construction on a replacement span would not begin unless and until further governmental approvals in the U.S. are obtained and several conditions established by Canada are met.”

Both Snyder and Canadian Transport Minister Marc Garneau stressed that the Gordie Howe Bridge is still a major priority regardless of the status of the Ambassador.

A Michigan judge threw out Moroun’s most recent court challenge to the Gordie Howe on Tuesday, Aug. 29, ruling that the suit was not filed in a timely manner. Moroun and Detroit International have pursued numerous actions against the project, claiming that federal approvals for the bridge were unconstitutional, and that Snyder illegally pursued an agreement with Canada for the bridge deal while cutting the state legislature out of the process. All of Moroun’s suits have been unsuccessful.

The Gordie Howe International Bridge has been in the works for more than a decade, with roots stretching back to 2004. In late August, the Windsor-Detroit Bridge Authority, the Canadian Crown Corporation that is overseeing the project, announced that the request for proposals deadline for the public-private partnership has been pushed back to May 2018.

The Authority has insisted that construction activities will begin in the summer of 2018, prior to the financial close of the procurement process, and that its overall timeline will not be delayed. WDBA plans to commence construction in 2018; no date has been set for completion, as the final timeline will be determined by the private contractor as part of the procurement process.

The Gordie Howe will be either a cable-stayed or suspension bridge.