U.S. Customs and Border Protection, a division of the Department of Homeland Security, announced Thursday (Aug. 31) that it has awarded four contracts for the construction of prototype concrete border wall segments, a step toward President Donald J. Trump’s planned wall across the U.S.-Mexico border. 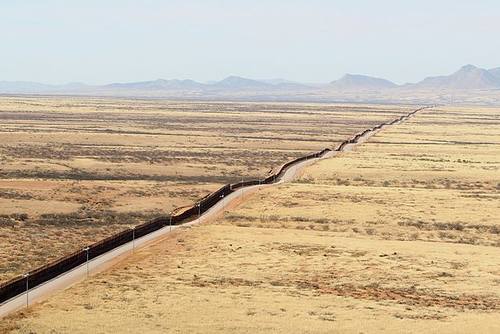 U.S. Customs and Border Protection, public domain, via Wikimedia Commons
The U.S.-Mexico border stretches nearly 2,000 miles, with about 670 miles currently divided by fencing, much of which was built after a 2006 authorization signed by President George W. Bush.

The New York Times reports that the new wall prototypes will be built along the border in the San Diego area, to supplement already-existing stretches of border fence. CBP says the wall prototypes will both serve to “deter illegal crossings in the area in which they are constructed” and “allow CBP to evaluate the potential for new wall and barrier designs that could complement the wall and barrier designs we have used along the border over the last several years.”

The four construction firms contracted for this prototype phase are:

The request for proposals, issued in March, calls for the design and construction of a reinforced concrete wall along with tactical infrastructure, including access roads, fencing, drainage structures, vehicle gates, LED lighting, fiber optics and communication towers. The government’s nominal design, the RFP explains, is for a 30-foot wall, though designs 18 feet or taller will be considered.

The RFP calls for the wall segments to reach at least 6 feet underground as well, to discourage tunneling under the structure, which has been an issue with some stretches of border fence that already exist at the nation’s southern boundary.

It specifies that the “U.S. facing side” should be “aesthetically pleasing in color, anti-climb texture, etc., to be consistent with general surrounding environment.”

The wall should also withstand attempts to breach it—with sledgehammers, pick-axes and other tools—for up to an hour and a half (at least between the ground and 12 feet up), allowing border patrol agents to respond to any attempted break-through.

The prototypes, according to the RFP, will be 30 feet long.

A separate RFP was issued for prototype wall segments made of materials other than concrete. Those contracts are slated to be announced next week, according to CBP. The “other materials” RFP includes have many of the same requirements in terms of height, depth and scalability, but adds a requirement for a “see-through component/capability that facilitates situational awareness.”

While a date is not set for construction to begin, officials estimate it will be sometime this fall. After the companies get the green light, they will have 30 days to complete their respective prototypes.

The new border wall was a signature component of Trump’s 2016 campaign, and its development was initiated by an executive order the president signed in January, days after taking office.

During the campaign, Trump said the wall would stand 35 to 40 feet tall, constructed of precast concrete. After the election, he said that he would accept fencing in some areas. The U.S.-Mexico border stretches nearly 2,000 miles, with about 670 miles currently divided by fencing, much of which was built after a 2006 authorization signed by former President George W. Bush.

Editor's note: This story was one of our most popular of 2017, and appeared in our Readers' Choice issue on Dec. 28. Since its original publication, four border wall contracts were awarded, prototype wall segments were completed and the Associated General Contractors of America (AGC) called for the government to protect employees working on the border wall, as local government threatened to take action against doing business with these companies.