As the remnants of Hurricane Harvey at last begin to move on from the Gulf Coast region, the storm has left in its wake massive damage, including at an Arkema chemical plant in Crosby, Texas, where a series of explosions were triggered early Thursday (Aug. 31) by organic peroxides used in paints and coatings.

Arkema’s Crosby plant, which produces liquid organic peroxides used in acrylic resins as well as PVC, fiberglass and other products, lost power earlier in the week as a result of Harvey, and subsequently, the company says, both sources of backup generator power were also lost. The result was a lack of critical refrigeration, which Arkema said would inevitably lead to explosions involving the peroxides, which must be refrigerated in order to remain stable. 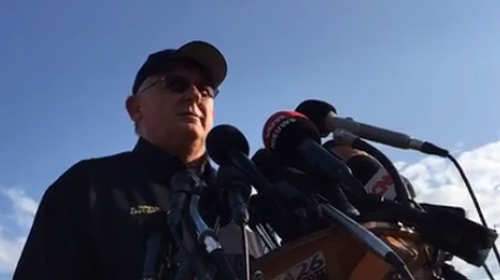 Harris County Sheriff's Office, via Facebook
Bob Royall, with the Harris County Fire Marshal’s office, said Thursday morning that the containers of organic peroxides “ruptured” in a series of “pops” followed by fire.

Two explosions are reported to have occurred at the plant just after midnight Thursday morning, sending plumes of black smoke into the sky. Arkema said in a statement that the company was in agreement with local public officials that letting the fire burn itself out was the best approach to the situation, as organic peroxides are extremely flammable. Officials are not allowing aircraft or drones over the area of the plant as of Thursday.

Bob Royall, with the Harris County Fire Marshal’s office, said Thursday morning that the containers of organic peroxides “ruptured” in a series of “pops” followed by fire, telling reporters he did “not want the public to think these were massive explosions.” Arkema, in a press release issued after the initial blasts, referred to the incident as "two explosions followed by black smoke."

Arkema officials told reporters that chemical vapors released into the air were not dangerous to people, though some could be irritated by the smoke, “similar to that of a large campfire,” according to NBC News. A FEMA representative told the network that the plume of smoke was “incredibly dangerous.”

Early Thursday, after the explosion, the Harris County Sheriff’s Office reported via Twitter that a total of 15 deputies went to the hospital with concerns after inhaling fumes from the fire; as of 10:30 Thursday morning, all 15 had been released. One deputy had been taken via ambulance, while the rest had driven themselves.

According to Arkema officials, it's impossible to intervene and restore refrigeration to the chemical storage because the plant was inundated with water at a level that the company was not prepared for.

"At Crosby, we prepared for what we recognized could be a worst case scenario. We had redundant contingency plans in place," the Arkema statement read.

"Right now, we have an unprecedented 6 feet of water at the plant. We have lost primary power and two sources of emergency backup power."

The plant itself was evacuated Tuesday when the threat of fire was first recognized. An area within 1.5 miles of the plant was evacuated Wednesday in anticipation of the explosions at the plant, though the evacuation was reportedly not mandatory. Crosby is located just northeast of Houston, and north of Baytown.

As of Thursday morning, Arkema officials said the threat of more explosions at the site remained.

The damage sustained to bridges and roads in the region is still difficult to assess. According to USA Today, the Woodforest Boulevard Bridge, across Greens Bayou east of downtown Houston, collapsed in the storm, and a number of other roads and highways have suffered wash-outs.

The City of Beaumont lost its entire water supply Thursday, as both its main pump station and its secondary water source became inoperable. A reported 118,000 residents were without running water as of midday.

The storm has taken its toll on the oil and gas industry in southeast Texas as well. On Tuesday, ExxonMobil representatives said the oil company sustained damage to refineries in Baytown and Beaumont, resulting in releases of hazarous air pollutants. The company said storm damage led to a release of sulfur dioxide at the Beaumont facility, and shutdown procedures at the two refineries resulted in releases of chemicals including benzene.

Colonial Pipeline reported as of late morning Thursday that its Lines 1 and 2 are shut down from Houston to Hebert, Texas, as a result of the storm. The company expects to bring the pipelines, which transport diesel, gasoline and aviation fuels, back online Sunday (Sept. 3) after they can be assessed.

At least 30 people are reported dead as a result of the storm, which made landfall in Texas Saturday (Aug. 26) as a Category 4 hurricane then pounded eastern Texas with rain for days. Harvey made its third landfall Wednesday further east, at the Texas-Lousiana border.

The worst-hit areas, around Houston, received more than 50 inches of rain from the storm system.

SSPC: The Society for Protective Coatings is encouraging its members to donate to any of a number of organizations that are providing relief in the region affected by the storm. The organization has provided a list of groups suggested by family, friends and members, along with links to make donating easy.