Fraudulent Occupational Safety and Health Administration training cards are circulating around the black market of New York City’s streets, and officials are cracking down.

The training required by OSHA can be costly for construction industry employees in terms of time—training to get the card is 10 hours total, which is time not spent on a job. Employers reportedly pressure their workers to obtain the cards, but given the time away from work required to complete the training, some employees have turned to simply buying forged cards instead.

Since 2015, there have been more than 30 construction-related deaths in New York City. Mark Peters, commissioner of the NYC Department of Investigation, told NBC New York that his agency had looked into these deaths, on sites where fake OSHA cards had been found, and the results were concerning.

The sales of training cards on NYC’s black market has been a consistent issue for the construction industry in the area, and what Peters discovered only drove home the point that OSHA’s safety training requirements are important.

"The fatalities were related to things that you would know to be careful of if you had proper safety training," Peters said. 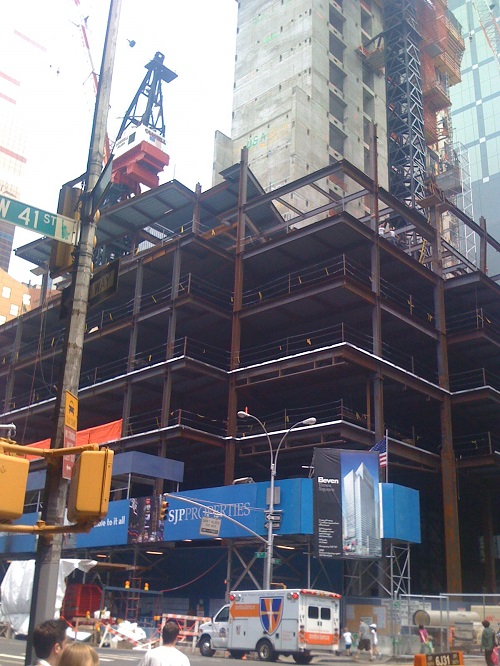 jebb, CC-BY-SA-2.0, via Wikimedia Commons
Fraudulent Occupational Safety and Health Administration training cards are circulating around the black market of New York City’s streets, and officials are cracking down.

"Workers aren’t getting the safety training that they need when they have these fake cards—and that’s really dangerous," he added.

Many of the workers are also non-English speaking, and this results in a “a huge power differential between themselves and their employers,” Manhattan District Attorney Cy Vance told NBC New York.

An undercover investigation led by The I-Team and Telemundo 47 Investiga revealed that it is fairly simple to get one of these fake cards, which start at only $60.

According to Victor Pacheco, a certified OSHA trainer, this practice has been going on for seven or eight years. Pacheco’s name appears on the cards, as well as his boss’ and other people he works with, he told NBC.

In the past, the DOI and the Manhattan District Attorney’s office had arrested workers with fake cards, along with the sellers. Now, the agencies are taking a new track—asking workers to hand fake OSHA cards in, no questions asked. The agencies will also provide training, at no cost.

Over the past eight months, 1,500 of the cards have been taken off the streets, but thousands more still remain. The end goal of ensuring construction site safety remains paramount.

“We want you to be safe. It doesn’t matter where you come from,” Vance told NBC, in reference to preventing further injury to workers through the program. “Your immigration status doesn’t matter. If you want to work in New York City, we want to help you make sure you and your family are safe.”

Out With the Old

Part of what makes OSHA cards so easily forgeable is that they are on paper. To help prevent this from happening in the future, the department started issuing plastic cards with a QR code that leads to the worker’s name, as well as their training details.

Even though some fake new-styled cards have been found on the streets, introducing the new style of card as part of the mandatory five-year training safety renewal will help phase out at least part of the problem.

Editor's note: The article has been updated to clarify that employees are not expected to pay for their own OSHA training.